The Grappler Versus The Wrestler: Which Is A Better Bet When Wagering On MMA Fights? 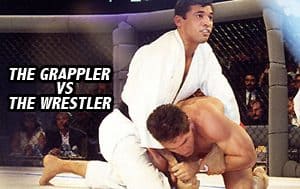 Both the grappler and wrestler have very similar game plans. They both want to get the fight to the ground and dominate from there. However, once the fight hits the ground, that’s where things start to change. The wrestler’s specialty is the actual act of taking the fight to the ground. From there they are generally very heavy on top and like to deliver punishing ground and pound for referee stoppage, TKO wins.

They are also usually very good grapplers because of their propensity to take fights to the ground. Still very different than grapplers, in the sport of wrestling, to expose your back to the mat is to give up points to your opponent. Being in the bottom position with your back exposed to the mat doesn’t score the same way in MMA but it still remains the losing position in the judge’s eyes which could work against you if the fight goes on for the full length of time. Therefore, wrestlers typically enjoy a heavy top control and are usually weak in the bottom position.

Grapplers, on the other hand, tend to be just as dominant from the bottom position as the top. In fact, some even prefer the bottom position even though in MMA it’s a gamble to fight from there. The reason that some pure grapplers prefer the bottom position is because there are more options to submit their opponent and end the fight from there. There are also more options to sweep which is what would generally be the best game plan for a grappler against a wrestler. Although there are more options to submit from the bottom, wrestlers tend to be a fish out of water on their backs. This is weakness that grapplers tend to want to exploit when fighting against the wrestler. It also keeps them in a safer position from ground pound being that’s it exponentially harder to do any damage from the position with strikes.

They also enjoy another advantage that comes automatically when you fight a wrestler. As a grappler who has specialized in all aspects of the ground game, when the wrestler is successful in taking you down, you also benefit from his attempt to take the fight to the ground. Although you may find yourself in a less dominant bottom position, there are more submissions from there anyway, and you have options to sweep him and put him where he is most uncomfortable.

So, to make things a bit simpler, the wrestler wants to get a take down and punish with strikes from the top position. He does the takedown work for the grappler, once there, the grappler must sweep or submit. If the grappler your betting on has had submissions from the bottom in the past, or TKO wins against wrestlers resulting from sweeps, you’re probably placing a good bet.

An interesting predicament that these two general fighters face is what happens in the standup exchanges. A lot of times, these matches stalemate in the wrestling because as much as it makes sense that the wrestler has good grappling because of his propensity to take the fight to the ground, the grappler also has good wrestling for the same reason. When these fighters stalemate in the wrestling or the grappling we end up seeing a very interesting kickboxing match between two fighters who don’t specialize in that at all!

When making your bets on the grappler versus the wrestler ask yourself these questions. Will he be able to stop the takedown? If not, will he be able to sweep or submit from his back? What happens if they stalemate in the wrestling, does he have the better, or more dangerous striking skills if the fight is forced to be fought standing?

For the wrestler versus the grappler, how is his balance on the ground? Does he get flipped over onto his back and swept easily? Have you ever seen him on his back at all? If he has any losses, how did they come? Has ever been submitted, and by which submission has he been caught by in the past? Has he fought any grapplers before? How is his striking in relation to the grappler’s? Will he win the exchanges when a stalemate occurs?

These are all very general ideas without considered the specific athlete. Most athletes that compete in the UFC are more than just a “striker”, “grappler”, or “wrestler and in fact, could be all three on any given day. This is just a general understanding of what each of the most common styles brings you in the most general way possible and in no way insinuates 100% likelihoods in anyway.

Some loose examples of grapplers vs wrestlers: