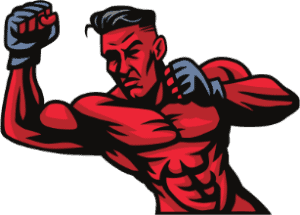 Easily the most dominant promotion in MMA and all of combat sports is the UFC which is an acronym for the Ultimate Fighting Championship. Learning how to bet on UFC odds first requires finding online sportsbooks offering betting lines on combat sports.

First, we provide access to the top online MMA gambling sites on the web today with the best UFC odds for each pay-per-view and televised event. We then cover the UFC bet types that can be expected, and how to punch through and understand the MMA odds involved. MMA betting online has never been easier.

The numeric UFC events that occur every four to six weeks or so feature the top fighters in both the male and female MMA ranks, and inspire online sportsbooks to produce betting odds for each bout inside of the Octagon.

Each event is simply labeled numerically (ex. UFC 260, UFC 261, etc.), a chronology that dates back to the promotion’s grizzly origins in the mid-90s.

If the event features a major fight, oftentimes the names of the two fighters will be featured in the subtitle of the pay-per-view’s name (ex. UFC 264: Poirier vs. McGregor 3).

UFC Vegas odds will be offered for each fight, with moneyline odds posted that reveal each fighter’s chance of winning as well as disclosing the amount of money that can be won against the number of dollars risked.

UFC Fight Night events occur nearly every week and feature up-and-coming combatants that are paying their dues and trying to earn a spot on a PPV card.

Think of UFC Fight Night broadcasts in the same vein as the boxing that can be seen on free television, with the pay-per-views more akin to huge PPV draws like Brock Lesnar and Jon Jones.

The betting odds for UFC Fight Night are set up in the same way that they are for their major cards, but don’t feature extensive prop bets and round betting options due to less interest than the PPV events.

Because the UFC fights are announced well in advance of the start date, MMA oddsmakers are able to craft lines and keep them posted for several weeks before the ref yells “let’s get it on!”

The best way to view the current odds is to signup with one of the trusted MMA betting sites we recommend, and you can see the available odds for the upcoming UFC schedule in real time.

Moneyline Odds For UFC Winners - As mentioned above, most UFC betting lines will list both fighters with their moneyline odds where payouts can be collected by wagering on the ultimate winner of the bout.

UFC Round Betting – Gambling on the round the fight will end and in what manner is a popular option at online sportsbooks. Although UFC round betting lines technically qualify as MMA prop bets, they’ve often got a category set aside to themselves.

UFC Prop Bets – Proposition betting on UFC fights includes any occurrence outside of the ultimate winner and the round related MMA odds mentioned above. UFC props can comprise whether a grappler curses in their post-fight interview, the first combatant to draw blood, or whether a fan tries to enter the Octagon. Anything oddsmakers can dream up are fair game, so long as they take place during the telecast.

UFC Futures – In standard team sports, futures odds tend to include a list of potential winners and sportsbooks take bets on each one winning a championship or some other accomplishment at the end of the season. Futures odds for UFC bouts can include “Which fighter will be champion as of December 31?” but we’ve yet to see lines of that nature. MMA futures most often entail speculative fights that have yet to be scheduled, with odds that will refund if the bout never occurs.

UFC Parlays – When UFC bets are combined, the odds escalate and reward gamblers with larger cash sums. Why bet on Conor McGregor to win when you can also lay some action on a Dustin Poirier victory, and if they both hit, your ultimate payout will be exponentially higher than when making a single wager.

Apple and Android devices are able to easily make mobile UFC bets because all of the online sports betting sites that we recommend on this page port their services to iPhones, iPads, and other popular tablets and smartphones.

These betting apps for UFC fights have access to the entire MMA sportsbook desktop site, all in the palm of your hand from anywhere in the United States. No download is required because they access these online UFC betting sites through web browsers like Opera, Safari, and others.

Because there’s no download, the most up to date UFC Vegas odds can be pulled up instantly while on the go for premium mobile MMA betting from anywhere the customer chooses.

Once round one begins, online UFC sportsbooks keep taking action on the fight while it proceeds. This is referred to as live betting odds on UFC fights, and each online sportsbook may differ in their allowance for in-play wagering.

Most live UFC betting odds are confined to the moneylines for winners, but MMA props can also be included if the fight is a big enough draw.

The odds update until the final round is over or a winner is declared via decision, DQ, TKO, or knockout, but payouts typically get smaller the later in the UFC fight that the wager is placed.