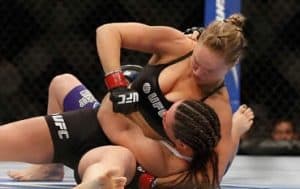 There is no one in the world that can accurately predict the outcome of every MMA fight they see. I guess that’s why betting on MMA is so much fun, it’s all about the risk involved. That said, all sports have trends and patterns that any good fan should be able to pick up and use to their advantage when making predictions. MMA is no different.

Each person/fighter/bettor/analyst has their own idea of how to make predictions. I’ve met guys who make fight predictions based on things that have nothing to do with the fight, like what a fighter wore to weigh-ins, or who they are currently dating. Although the latter can have more of effect on the fighter than people might imagine, the tips you will find below are all going to have some relevance to the actual fight. I’ve been fighting for over 10 years and have competed professionally in Muay Thai and MMA, so the tips below come from an actual fighter as well.

This means I would have to risk $135 dollars on Germaine De Randamie to win $100, should she win the fight. Conversely, I would only have to risk $100 to make $105 on Holly Holm. This means that the odds makers think that Germaine De Randamie has a slight edge to win this fight and therefore offer less money as a prize for taking the presumed “safe bet”. However, no bet is safe in MMA, especially not against 16 time boxing World Champion and Former UFC Bantamweight World Champion, Holly Holm.
Subtopic: MMA Predictions – along with discussing MMA predictions – what kind of info is looked at to make them, etc, this section can include a featured area about a big upcoming MMA event and have a predictions preview of that fight specifically.

Making MMA predictions is incredibly complicated and can include several factors. No matter how close or complete your analysis is, you’re never going to be able to factor in all the variables. With that said, here are some things you can look for to further educate yourself on the likelihood of certain fighters beating others.

Things To Consider When Deciding Which MMA Fighter To Bet On: Styles Make Fights

“Styles make fights” is a popular saying in the boxing world but it couldn’t apply more to mixed martial arts. Typically, fighters have a background of training before they begin their trek into the world of MMA. Its usually either a striking, wrestling, or grappling skillset of some sort. Fighters and coaches within the sport of MMA look at wrestling as the most useful background to have. This doesn’t mean that a fighter with a striking or a grappling background is any less dangerous, after all, Joanna Jedrzejczyk had a striking background and she has been the most dominant champion that her weight class has ever seen.

The reason that a wrestling background is considered to be the best background to have in MMA is because it allows you to control the fight. All fights start standing so, if you have the better striking and prefer to keep things on the feet, you can use your better wrestling skillset to avoid your opponent’s takedowns and win the fight with your striking. If you fight a guy that has better striking (which is usually a painful realization) you can use your wrestling background to take your opponent down and win the fight with your superior grappling. Wrestling gives you the keys to control where the fight takes place. Now, if you’re opponent has better striking and grappling than you, it’s going to be a grueling fight, but you can still win by repeatedly taking him down and standing back up before he can get a hold of you on the ground. Takedowns still score a great deal in modern MMA and you’ll be sure to win (a not-so-exciting) judge’s decision with your wrestling background.

That outlines a clear path to victory for the other skillsets as well. If you’re a striker, you will need to develop your defensive wrestling skills (aka takedown defense) to be successful against those wrestlers. On the other side of things, if you’re a grappler, you’ll need to develop your offensive wrestling skills (aka takedowns) to be able to take those wrestlers down (or trick them into thinking you have better striking so they take you down). There’s an intuitive advantage for each of those skillsets. For the striker, the fight always begins standing. For the grappler, if the wrestler is successful in taking you down, well that’s where you want to be anyway.

With that explanation in mind, let’s consider your betting options. You can go right to UFC.com to get all the stats you need, like takedown offense and defense along will skill breakdowns of both striking and grappling. If the fighter that you are thinking about betting on is a grappler, like Damian Maia, you might want to consider how good he is at taking the fight to the ground versus how good his opponent is at keeping the fight standing.

Then, to add a layer, you might also want to consider how good Damian Maia is at striking in case he has trouble taking the fight to the ground.

Then, to add another layer, you may want to contemplate how good his opponent is at grappling, considering the statistical likelihood of his surviving on the ground with Maia or perhaps even surprising everyone by excelling in his opponent’s strong suit. This is only one example of the incredibly complex nature of making MMA predictions. The layers can go on forever in complicated match ups and odds from the MMA betting sites we recommend.