The Wrestler Versus The Striker: Which Is The Better Bet In MMA? 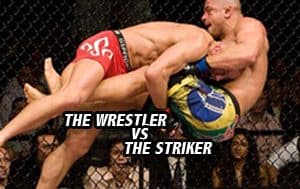 What you’ll read below builds on what was written on the MMA betting tips index page so if you haven’t had a chance to read that, go ahead and get a feel for the “styles make fights” portion so you’ll have a better idea of what’s going on here.

Let me start this off by saying that I am, by no means, an MMA Nostradamus. I’ve been a fighter for over 10 years and I’ve competed professionally in Thailand and the United States in both MMA and Muay Thai. What you read below are merely ideas and examples to inspire you to create a method that is all your own when it comes to making predictions and betting on MMA online.

Now knowing that “styles make fights” we can start to peel back some the layers and dive into some of the complexities of MMA. Let’s start this off by talking about one of the classic matchups.

The Wrestler versus The Striker

The first question to ask when betting on the striker is: How good is the striker at using his lateral movement and controlling the distance? A good example of a fighter who can masterfully control the distance is Conor McGregor. Watch McGregor’s forward stalking pressure and how he seems to fade away as his opponents leap forward at him. You’ll see how good he is at keeping the distance despite his opponent’s counter-pressure. Another good example of a fighter who has excellent lateral movement is T.J. Dillashaw. Never moving in or out in straight lines he is constantly moving away at angles and is like a cat in a bathtub when his opponents try to pin him against the cage and close the distance. Using the cage as a backstop for forward pressure is a common tactic by the wrestler, they look to run straight through you. The striker needs to use timing in his strikes to keep the wrestler off balance and maintain control over distance, while using their movement so they can’t get caught on the cage where the wrestler can better attempt a takedown.

How good is the striker’s takedown defense? At some point in the fight, the wrestler is going to be successful, at least once, at initiating a clinch. When betting on the striker in this matchup, ask yourself, how good is the striker’s takedown defense versus how good the wrestling is of their opponent? Has their opponent been able to take down strikers in the past that have great takedown defense stats? If that’s the case and the striker that you’re betting on isn’t known for excellent lateral movement, perhaps the bet isn’t the smartest one to make. One thing to look for in great strikers is how aggressively they move forward when they strike. Do they run forward blasting punches into their opponent wildly or do they take a more controlled and balanced approach? A safer bet would be on the striker who doesn’t lose their balance as they come forward with strikes. A fighter who wildly blasts forward is more likely to enter into an unintended clinch or let the wrestler drop under them as they strike and get taken down.

Now, for the wrestler. How good is the wrestler at overwhelming his opponents and pinning them against the cage? How slick is the wrestler at timing incoming strikes to close the distance and get a takedown? The striker must move forward to land their strikes. One of the main methods that a wrestler might use to get his takedown without using the cage is to duck under the strikes as the striker moves in and crash into their forward momentum to take the striker down. Like a football tackle when someone tries to punch you. The striker will try to see and predict this moment to maintain control over distance. The wrestler works to surprise the striker by vanishing at the moment the striker envisions his punch landing, and then appearing again underneath them lifting them up into the air for a monstrous takedown. If a striker has great takedown defense and lateral movement, this is where the wrestler will get his chance.

How good is the wrestlers striking? Just as we considered the takedown defense of the striker, we should also consider the striking of the wrestler. In this case, defensive and offensive tactics should be considered. A well-known fact about striking is that everyone has a puncher’s chance. Especially wrestlers, who are known to have rancorous power. What does your wrestler like to throw? I’d bet that he likes overhands. Typically, wrestlers like to throw the over hand because sends your body in a similar momentum as a takedown attempt and is used well as a set up. It’s also probably the hardest punch the human body can kinetically throw. That’s why we see guys like Dan Henderson and Johnny Hendricks throw these punches to great effect, it sets up their takedowns if they don’t land and knock the opponent out first. So, how well does your wrestler set up his takedown attempts with strikes? Or, how well does his opponent defend against powerful overhand punches?

This is just one of the quintessential match ups that most people talk about when they speak generally about Mixed Martial Arts. This article was written to remain extremely general and to allow for a loose interpretation of the ideas within it while providing some questions to ponder and inspire some ideas in yourself. You can never make a 100% safe bet on MMA but here’s an insight to how a professional fighter looks at how styles match up. There are exceptions to every rule and nothing is ever 100% in this sport and that’s why it’s so exciting.

Some wrestler versus the striker match ups are: