posted by Joe Miller on December 28, 2017 IN MMA Fight Predictions 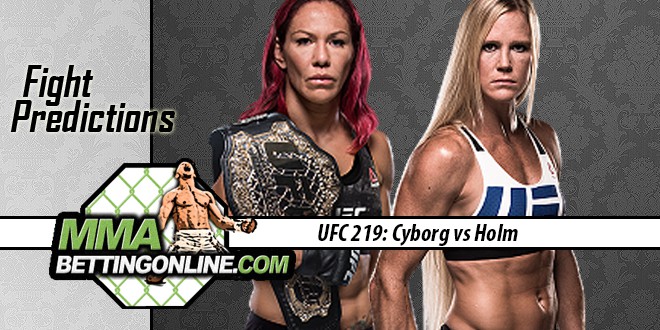 Everyone knows Holly Holm as the woman who killed the queen. When she knocked out Ronda Rousey she caused the whole world to jump out of their chairs and scream. There has only ever been one other woman in the history of Women’s MMA that reached the level of greatness that Ronda Rousey reached. While Cris Cyborg didn’t get nearly as much media attention, she has been known as the most dangerous woman on earth for the better part of a decade. Cris Cyborg versus Holly Holm happens Saturday, December 30th in Las Vegas. The co-main event is the long awaited lightweight return of Khabib Nurmagomedov versus Edson Barboza. Jimmie Rivera fights heavy handed John Lineker on the card along with Cynthia Calvillo versus Carla Esparza, and Carlos Condit versus Neil Magny. This article will focus more heavily on the main event and co-main event.

Holly Holm might be the most tactful and precise striker in the UFC. Cris Cyborg might be the most violent. They have both competed in high level professional striking matches outside of the UFC but their history in the ring, outside of the octagon, paints very different pictures. Holly Holm made an entire career out of professional boxing. She was a 16-time boxing world champion that defended her titles across three different weight classes. She won the New Mexico Boxing Hall of Fame Fighter of the Year award every year from 2005 to 2010 and then again in 2013. At the time of her retirement, she was the highest ranked female boxer of all-time. Holly Holm has a striking fluency that is widely unknown in the UFC and was shown to great extent in her fight against the overly aggressive Ronda Rousey.

Cris Cyborg’s career in Muay Thai was short lived and very telling of her style. In her Muay Thai fights, as well as in her MMA fights, she relies heavily on her aggressive, almost hysterically violent intent. She frenzies her opponents. Since the very beginning of Women’s MMA, Cris Cyborg has been the terrifying ghost in the back of everyone’s mind. Out of her 18 wins in MMA she has 16 knockouts. She’s 2-1 in Muay Thai, losing only to world champion Jorina Baars proving that if you hurt Cyborg early, you still won’t have an easy fight, but you may have more of a chance. Jorina was substantially taller than Cyborg and equally as aggressive. She showed that there is a hole in the defense of Cyborg if you can properly time and place a head kick. We saw in that fight that if you’re taller than Cyborg and just as aggressive, Cyborg will have a tough time.

Holly Holm is not taller than Cyborg though, she has a 1 inch reach advantage but that is negligible in a fight like this. She does, however, have world-class head kicks and knows how to place them perfectly as shown in her fight with Bethe Correira. When I’m comparing these fighters in my mind, Holly Holm stands out in pure striking ability. She can change and adapt her game plan as she sees fit, she’s intelligent and highly experienced. She understands the subtle nuances of fighting better than anyone in the game and has a much deeper pool of knowledge than Cris Cyborg. In pure skill, she is unmatched.

But fights are not decided on pure skill. There is a human component, an emotional, physical, and mental aspect of fighting that negates logic and forces the outcome in fights out of brutality and violence. That’s where Cyborg shines. She is the dark side of the force to Holly’s light. She doesn’t care about your skills, or ability to adapt. She’s not going to adapt, she’s going to slam that gas pedal down and smash your face into the cage until the referee pulls her off you. From the moment the initial bell rings, she will be in Holly’s face and that’s where Holly does her best work. My prediction is a bold one. I think Holly Holm is going to knock Cyborg out in the second round.

Holly Holm’s striking is unlike anyone else’s. Despite her ability to fight in multiple styles and tactics, her most destructive style is one of the counter puncher. When her opponent is overly aggressive, her skills seem to be fully activated. Ronda Rousey is my key example. As she ran forward, she found it difficult to catch Holly with anything solid and keep her on the cage. Time and time again, Holm slipped punches and avoided clinches with her superior movement and counter striking ability. She continued her intelligent tactics until the right moment opened up for that head kick KO that won her a world title. With Cyborg, Holly is in quite a bit more danger. At any moment, it could be over for her so she will need to be more careful than ever before. Faster than she has ever been, but I think she will be. Holly Holm by KO in the second. You will find the odds as of this writing below, but you can check the current MMA betting odds updated in real time.

Despite Khabib Nurmagomedov’s recent trouble making lightweight, he has returned to the class for another try at seeing that coveted “155” on the scale. He is a grinder, a ruthless grappler with a heavy top game and tricky ground and pound. He is the quintessential bad match up for basically anyone who isn’t Eddie Bravo and especially for guys like Edson Barboza. Edson is a striker through and through but he also holds a brown belt in Brazilian Jiu Jitsu under Ricardo Almeida. Almeida himself is a UFC alum and understands MMA in the way he expresses his own brand of BJJ. Edson undoubtedly has the skills to defend takedowns or scramble back to his feet under most circumstances but my primary curiosities will be satisfied when we see if he can do it against Khabib.

Currently, there is no real argument against the notion that Khabib Nurmagomedov is the best in the UFC at what he does. He comes forward, gets a takedown and seems to prefer half guard as a dominant ground and pound position. He is heavy on top, stifling in his pressure, and more dangerous as the fight goes on. His style weighs on his opponents physically and mentally and has in my view, the highest statistical likelihood of winning fights by either unanimous decision or ground and pound stoppage. He has become famous for something called the “wrist ride” where he pins his opponent’s wrist behind their back in half guard and uses his heavy top pressure to keep them pinned against the cage while he delivers punishment with his free hand.

Edson Barbosa was the first guy in the UFC to win a fight via spinning heel kick, one of the most devastating kicks in all of combat sports. He has since become known for his dynamic kicking attack and is also the only UFC fighter in history to win two fights by leg kick stoppage. To give you a frame of reference for how impressive that is, consider this: you can’t shut the central nervous system down in a human by leg kicks like you can by attacking the head. This means that he has won two fights in the most competitive fighting organization in the world, by kicking his opponent’s leg until they couldn’t stand on it to defend themselves properly. It makes sense when you consider his storied professional kickboxing career before he made the switch to MMA. He was 25-3 as a professional kickboxer with 22 KO’s and 17 first-round finishes.

My first question is how Edson is going to react to fighting a guy like Khabib. Heavy kickers tend to give up their legs for more takedown attempts than other strikers. Will he let the kicks go? Or, will he hamstring his best weapon in fear of getting taken down? We have to assume that a guy with a pro kickboxing resume like that has been training for a guy like Khabib since he decided to make the switch to MMA. Khabib’s style is Edson’s obvious nemesis. I would imagine that he has been developing his takedown defense and ability to get up from being taken down as his first priority for a long time.

His BJJ coach, Ricardo Almeida is also not just any BJJ black belt, but UFC vet himself. He likely knows how to fashion Edson’s training to highlight is best skillsets. With that said, as a brown belt under Almeida, is it enough to keep the best top game grappler in the UFC off of him? Khabib has been developing his game since he was 8 years old in Dagestan with his father as his head coach. We can be sure that Edson has not been working on defending that game plan for as long, but we also don’t know if that’s required. All my senses tell me to take Khabib for the unanimous decision win via 3-round smoosh. With that said, Michael Johnson isn’t on the striking level of Edson Barboza and he rocked Khabib. I got Edson Barboza second round KO after he defends the takedown!