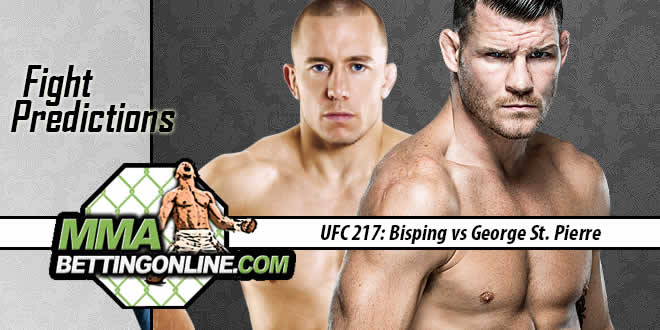 For the second time at Madison Square Garden, the UFC has chosen to stack the card with three title fights and a returning legend. The women’s Strawweight Champion and my current favorite fighter, Joanna Jedrzejczyk will meet Rose Namajunas to defend her belt. Cody Garbrandt puts his Bantamweight Championship on the line agasint former teammate and rival, T.J. Dillashaw in the co-main event. Finally, George St. Pierre comes out of a 4-year retirement to take on the Middleweight Champion, Michael Bisping in the highly publicized main event. UFC 217 promises to be a night to remember with legendary MMA fighters and plenty of MMA betting action to go around.

Joanna might have the fastest hands in the UFC and Rose might be the most well rounded female fighter on the roster, pound for pound. I’ll start this off right from the beginning and say that I think Joanna is still going to be too much for Rose. Her skillset is too specialized. Her takedown defense and ability to grapple back to her feet is what allows her to have arguably the most vicious striking in the UFC. She seems to be able to fit three punches into the same opening that normal fighters can only find one.

The most terrifying aspect of fighting Joanna, from a fighter’s perspective, is actually that she’s not a power puncher at all. Its unlikely that she’ll end the fight in a single blow, instead her opponents struggle as Joanna defends their takedowns time after time as the fights go on. They continue to be battered by combination after combination until their faces are a bloody mess. It would be less destructive to get knocked out quickly with a single shot.

Rose Namajunas is a brown belt in Brazilian Jiu Jitsu and presents a real threat to Joanna despite what my fandom in the previous paragraph may make it seem. Her best bet, as it appears to me, is to get a takedown and use her superior grappling to secure positions and deal damage with ground pound or setting up a submission. Its no secret that she has the better grappling but Joanna specializes in escaping the very positions that Rose would look to put her in. From Rose’s past fights, most of her takedowns come by way of hip throw or trip from within the clinch. That means that she will have to rely on closing the distance, entering the clinch, and securing a takedown without shooting. Although difficult, it seems possible.

Most of the fighters that Joanna has faced have tried the traditional takedown attempts. Changing levels and shooting under her strikes, which has consistently been met with a nasty sprawl and solid defense. Rose probably wont shoot that way though, so this will be a awesome opportunity to see if Joanna can stop a different type of takedown. My prediction for this one is a nasty decision win for Joanna Jedrzejczyk. I think Rose’s striking is just smart enough to not get finished by Joanna. I also think she’s probably the toughest female fighter on the planet tied with Joanna. I think she will fight until the last bell but lose a closer decision (probably a split) than anyone has lost to Joanna Jedrzejczyk before.

The rivalry between these two has been well documented for quite some time now. They were former teammates at Team Alpha Male where Urijah Fabrer can be credited for recruiting and effectively beginning T.J. Dillashaw’s MMA career. When Urijah brought in Duane Ludwig to be head coach of Team Alpha Male, he and Dillashaw hit it off. Most of the fighters at TAM benefitted from Ludwig but Dillashaw benefitted the most.

He won the Bantamweight world championship with Ludwig in his corner in possibly the most dominant and impressive performance of his career against Renan Barao. His striking seemed to turn from the traditional jab-cross-hook boxing style to a stance-switching kickboxing style with nuanced angles and complicated pressure that was made possible with excellent footwork and unbelievable timing. I would say that Dillashaw’s greatest attribute is his timing. In both his takedowns and his striking. I think he will try and use his striking for the most of the damage he would like to deal but will undoubtedly mix in takedowns and clinching to keep the champion guessing.

Cody Garbrandt was a 32-1 amateur boxer and standout wrestler in high school. He doesn’t have the wrestling credentials that Dillashaw has, but coming from Team Alpha Male, I’d imagine wrestling isn’t where his weakness lies. Garbrandt is a more traditional boxer than Dillashaw and that could seem like a flaw. However, despite the fact that Cody doesn’t attempt to use his movement the same way that Dillashaw might, or take as many angles, he has made simple footwork changes to his own style of striking for MMA that has garnered great results against a heavy mover like Dillashaw.

We saw those results in his win against Dominic Cruz. As Cruz would strafe from left to right moving erratically, Cody made simple stance changes, and simple steps to stay right there with Cruz and do less work. He simply spent less energy and let Dominic run circles around him missing and slipping. Every time Cruz thought he found an angle in, Cody was a waiting for him with a three-punch combination, dropping him several times in the fight. I expect Garbrandt might have a similar game plan for TJ. To let TJ come to him and when he does, to be quicker and more accurate with his punches. Unless he lets his emotions get the better of him and rush forward into unknown territory. This is a big risk, as we all know the champion is a hot head.

My prediction for this one is a crapshoot, I don’t know whom to pick. Dillashaw had a great showing with Lineker but Linker doesn’t have the wrestling that Garbrandt does. Ok, here’s my guess, Garbrandt will rock TJ a couple times and find a finish in the second half of the fight by TKO. But, like I said, it’s a crapshoot, so who knows.

GSP is one of the all-time MMA greats and really the only MMA fighter to go out on top. Most MMA fighters fight until they get a few career defining knockout losses and their loved ones have to appeal to them to stop fighting. Even then, they tend to want to come back for one more (I.E. B.J. Penn). GSP, on the other hand, had the awareness to step away from the sport when it was started to wear on him. Now, with nearly 4 years since his last fight, he contradicts me to fight Michael Bisping for the Middleweight Championship. The question on my mind is at the age of 36 will he look the same as when he was in his twenties and early thirties?

If he were to look the same, that would mean being the most well rounded MMA athlete in UFC history. I can comfortably say that about GSP and not worry about anyone’s critique because it is an idea that is openly accepted and understood. He had no high level wrestling background; in fact, his background is in Kyokushin Karate. Despite that, wrestling became his most highly touted skill in the octagon, repeatedly taking down NCAA division 1 national championship wrestlers and proving to be the most dominant Welterweight champion in the history of the division. His most valuable skill is his ability to change the pace of the fight in an instant with a takedown and keep his opponents guessing on where the fight will take place.

Michael Bisping is a striker. A really, really good one. He’s not the most well rounded MMA fighter to ever live but he has specialized his skills to emphasize his greatest skillset, which is striking. Everyone knows what he is going to do when it gets into the cage, aside from the small variations, he still manages to pull it off. His most valuable asset as a fighter is his toughness and endurance. Michael Bisping is truly one of those fighters you will have to KO in order to really defeat him. Pierre might win a decision, but it will be the hardest decision win of his life. Bisping specializes in grappling back his feet in much of the same way that Joanna Jedrzejczyk does.

GSP might be able to get him down but keeping him down is another question that will be answered this weekend at Madison Square Garden. Of course, there’s the size difference that we need to talk about. Bisping is the Middleweight champion and he won the Ultimate Fighter at Light Heavyweight. GSP was the Welterweight champion. So, there will obviously be a big size difference between the two fighters. I personally think size differences matter the most when grappling and wrestling so it’ll be interesting to see if GSP can haul around the bigger guys like he could the guys at 170. My official prediction is likely a boring fight if we see the GSP of old. He will dominate the grappling exchanges and smartly look to fight on the ground where Bisping is the least dangerous. Which means I’m taking GSP for a decision win.  Below you’ll find the odds for this fight that are in place as of this writing.  To check current odds, visit one of the premium online sportsbooks covering MMA betting lines.