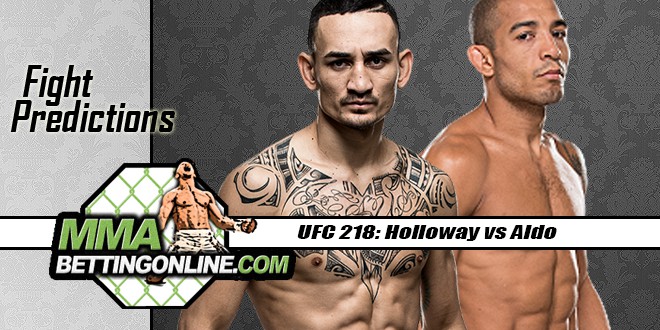 One of the most exciting rematches of the year is set to take place this Saturday, December 2nd in Detroit, Michigan. Max Holloway previously defeated former featherweight kingpin, Jose Aldo, by ground and pound TKO at UFC 212. Aldo was not originally scheduled for UFC 218 but is filling in for Frankie Edgar who suffered an injury forcing him to withdraw from the main event with Holloway. With roughly 4 weeks’ notice, Aldo was enthusiastic about the chance to rematch Max and redeem his last loss. This prediction article goes deep on the rematch between Jose Aldo and Max Holloway but the other fights on the card are incredible. Overeem vs Ngannou in the co-main event (I got Ngannou, Overeem’s chin is done). Henry Cejudo vs Sergio Pettis, Eddie Alvarez vs Justin Gaethje (might be fight of the year) and Tecia Torres vs Michele Waterson. One of the best cards of the year in my opinion.

After their first fight where Max Holloway stunned Aldo with a vicious 1-2-lean back-1-2 combination and subsequently finished him in a grueling ground and pound struggle, Aldo’s camp came out to media about his leg injury prior to the fight. It was apparent during the fight that Aldo was making some tactical mistakes by not throwing his usual dangerous leg kicks that have been critical throughout his career. Jose Aldo has taken this fight as a fill in for Frankie Edgar and has had roughly 4 weeks of a real training camp to prepare. He was apparently enthusiastic about taking the bout which leads me to believe that he was already in shape and excited to be healthy for the rematch. So, let’s talk about the first fight.

Holloway came out and immediately started prodding and poking Aldo’s defense to little impact. Aldo had some early boxing success coupled with a big flying knee against the cage and looked to be controlling the pace towards the end of the first round. We know that Aldo looks to control the pace as a measure of success in his past fights. His energy level seems to depend on it. Despite his extensive history with 5 round fights, it seems that his energy level is more sensitive to higher paces. We saw him take the last round off in his fight with Mark Hominick when he dominated for the first four rounds as an example. Holloway, on the other hand, never seems to fade as the fight goes which leads me to believe he will have the advantage in the later rounds, especially because Aldo took this rematch on relatively short notice.

There were two major things missing from Aldo’s successful first round. We know from past fights he has had with taller opponents that he looks to shoot takedowns to mix up the strategy. He didn’t shoot any takedowns against the taller, Max Holloway in the first round, nor did he throw any of his lethal leg kicks. From Holloway, his movement seemed to be stifled and his apparent pace-dictating strategy wasn’t working. His output was significantly lower than most of his other fights because of Aldo’s propensity to slip and counter rapidly. Aldo appeared in control for the first round and the first half of the second. However, one of the commentators of the fight and former world champion, Dominick Cruz, mentioned during the fight that he thought Holloway was playing it safe for the first portion of the fight because Aldo’s conditioning might be in question. That, instead of Aldo’s propensity to slip and rip counters, might have been what was causing Max to wait as much as he was in the beginning.

Towards the end of the second round there was a pivotal moment in the fight, Aldo landed a clean combination and Max took it on the chin. Max then realized, according to analyst and former championship contender, Dan Hardy, that Jose also was losing steam and it was finally time to step it up. He went back to his corner nodding in confidence and came out in the third round and the pace was his to dictate to Aldo. His tempo picked up, his output increased and Aldo was still not throwing leg kicks or takedowns. The finish ensued shortly after.

I think Jose Aldo showed that he was more violently dangerous in his striking than Max. I think he was operating at a big disadvantage and still showed heart and danger in his limited capacity to attack. Max clearly showed a better conditioning and ability to outlast Jose Aldo. My guess would be that is what he will try and do that again only to start it a lot sooner. He knows that Aldo is more dangerous in the beginning of a fight but he is also a lot more confident now as the champion with a KO victory over Aldo. I think Aldo’s enthusiasm to take the fight on short notice probably means he’s healthy and we will be able to expect him to leg kick Holloway, and leg kicks change the game entirely. Holloway has an apparent weakness for one of Jose Aldo’s most damaging strikes. Holloway absorbed 17 of 23 leg kicks from Cub Swanson, 24 of 26 leg kicks from Jeremy Stevens, and 25 of 25 leg kicks from Ricardo Lamas. None of those guys kick like Jose Aldo. I think Max won’t wait long enough to get started because of his new champion’s confidence and that will give Aldo the leg kick avenue he needs to damage and eventually finish Holloway in the first half of the fight. Aldo by TKO in round 2.  Yes, I know my predictions do not line up with the UFC betting odds which are favoring Holloway for the win, but I’m calling as I see it from a fighter’s point of view.