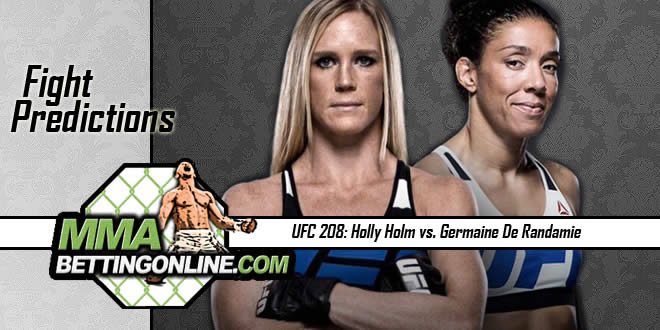 The inaugural women’s Featherweight Championship will be contested in the first UFC event to ever take place in Brooklyn. Holly Holm takes on powerful Dutch kickboxer Germaine De Randamie to crown the first women’s Featherweight kingpin in the main event. The co-main event features middleweight hall of famer, Anderson Silva, as he takes on the up-and-comer, Derek Brunson, in what promises to be an explosive contest of youth vs. mastery. Read on to get brief descriptions of each fighter and my personal picks and explanations for UFC 208 in Brooklyn.

Holly Holm might be the most decorated fighter on the UFC roster. 38-2 with 3 draws as a professional boxer, she is a 16-time world boxing champion and was inducted into the New Mexico Boxing Hall of Fame in 2013. Holm started her career with legendary MMA super camp, Jackson Wink MMA, and has stayed with them throughout the duration of her career. Her most notable win came in November of last year when she stunned the entire world with his devastating KO of the undefeated and dominant Bantamweight Champion, Ronda Rousey. She is now coming off two consecutive losses and moving up in weight to claim this inaugural Women’s Featherweight World Title. She aims to be a multiple time champion in both boxing, and MMA.

Germaine De Randamie has been fighting in the UFC since July, 2013 when she had the most notable win of her MMA career against women’s MMA pioneer and Holm’s training partner, Julie Kedzie. De Randamie is also one of the most decorated fighters in the UFC. She has a striking background going 37-0 in kickboxing claiming 1 Dutch title, 3 European titles, and 10 World titles. She trains with one of the meanest strikers on the planet and one of the first Dutch kickboxers to successfully make a transition to MMA, Melvin Manhoef, at his gym in Hoofddorp, The Netherlands.

Striker vs striker is always a fun matchup. It’s like a microscope gets put on the striking aspect of mixed martial arts and we get a rare opportunity to see what high level strikers can do. With that said, Holly’s coaches who are known to be master fight planners may have a different approach to this one. Holly is the more complete fighter, training with Jackson Wink since the beginning she is no stranger to being put on the ground and in bad positions. On the other hand, Germaine trains with legendary Dutch kickboxer turned MMA fighter, Melvin Manhoef, which could be a dangerous twist on her already aggressive striking style. Yet, that doesn’t help much with the seemingly obvious grappling hole in her skillset.

Does that mean I think Holly will try and grapple her? Maybe! De Randamie has the quintessential Dutch kickboxing style, she’s going to come forward with a tight guard, apply pressure and want to throw a lot of low kicks with punching combinations. Holly’s striking shines when fighters push pressure on her, she tends to land cleaner and have the more effective shots while moving backward and countering. Her movement and countering are her best qualities, I’m calling Holly Holm by TKO in round 2 via ground and pound after Germaine eats a few counter left hands as she presses forward and throws her jab at Holly throughout the fight. For the record, I also think there is a really good chance that Holly rocks her with a punch or a kick and then submits her.

Our Pick: Holly Home Via TKO 2nd Round

Anderson Silva is the most dominant champion in the history of the Middleweight division. He has so many awards that his accolades seem to never stop. He has the record for most “Knockout of the Night” bonuses, consecutive title defenses in the middleweight division, most finishes in the UFC, longest win streak ever in the UFC, the list goes on and on. Perhaps more notable than his stacked resume, however, are his recent losses. His career has been on a decline since he lost his middleweight title to Chris Weidman and then horrifically snapped his leg in their rematch. Now, 41 years old, the question in this match up will be, does he still have it?

For his opponent, Derek Brunson, this could be the chance to break out of relative obscurity and into the mainstream spotlight of the UFC. Brunson is fairly unknown despite competing in the UFC for over 4 years, with his first fight being against a high-level veteran in Chris Leben in late 2012. He has 7 wins in the UFC, finishing 5 of them via TKO and one by submission. He has a collegiate wrestling background and has been known to charge forward wildly with vicious power in his left hand. He closes the distance and has the proclivity to take the fight to the ground where he can dominate with his heavy top control.

Not your typical striker vs wrestler match up, Anderson Silva has always been known for being light years ahead of his competition. He’s nothing short of magical when you see him fully engaged and within his element. His head movement is the some of the best that the sport has ever seen and he deals with the type of pressure that Derek Brunson brings forward almost as if it’s a specialty of his in its own right. The way I see it, Brunson’s largest opportunity is to use his youth and athleticism to create chaos and catch Anderson with one of those big overhand lefts that would knockout an elephant. Any other way the fight goes, I have Anderson winning by sheer mastery. So here it is, Anderson Silva via KO in the second round. Or, perhaps he gets taken down by the wrestler where he finds a submission like he did against Chael Sonnen all those years ago.

Our Pick: Anderson Silva via KO 2nd Round

Ronaldo “Jacare” Souza is one of the best pure grapplers in all of MMA and is among the most decorated as well. His nickname “jacare” means “alligator” in Portuguese. He got his nickname from his appetite for competitors in the grappling world. He holds a blackbelt in Brazilian Jiu Jitsu from Henrique Machado and a blackbelt in Judo along with many gold medal victories at the BJJ World Championships. Jacare holds 23 wins with only 4 defeats with 16 submissions and 3 knockouts.

Tim Boetsch is a big, strong, brutish man with a strong right hand and a division 1 collegiate wrestling pedigree. A true veteran, his first fight in the UFC was in 2008 agasint David Heath where he won by TKO after a devastating throw. Since then he has been in and out of the UFC and although he went on a losing streak he seems to have picked it back up winning his last two fights by KO. He’s known for being able to come forward and fight well on the inside while closing the distance and backing his opponents up against the cage for big takedowns.

Ronaldo “Jacare” Souza is widely considered as the best pure grappler in MMA. Tim Boetsch is a grizzled veteran, a high level thoroughbred wrestler with petrifying power in his hands. Jacare has developed a powerful striking game in recent years that he uses to set up his takedowns and that could be the difference in this fight. Although Souza has plenty of submissions in the first round, he tends to comes on stronger in the later rounds to find his submission by tiring out his opponents first and then taking advantage of the fatigue. Tim Boetsch loves the deep water as well, with many of his fights going the distance it will be interesting to see if Boetsch can defend the submissions later into the fight. Tim has a huge right uppercut and relies heavily on forward pressure to damage his opponents in the striking arena. I think he will connect early and drop Jacare, but I think Jacare will survive with his bottom game grappling. Ultimately, I have Ronaldo “Jacare” Souza by submission in the second half of the fight.

Our Pick: Ronaldo “Jacare” Souza By Submission 2nd Half

Glover Teixeira is 25-5 with 15 wins coming by way of KO. He is a second-degree Brazilian Jiu Jitsu blackbelt under Luigi Mondelli and has been competing at the highest level in the UFC since 2012. Although he is an accomplished grappler he has become known for explosive and powerful striking. He often uses that authoritative striking to set up his takedowns and look for ground and pound or submission finishes. He has more KO finishes in the past than he does submissions so that tells you where his head is at while he’s on the ground.

Jared Cannonier is a relative new comer to the UFC and enjoys the advantage of remaining mysterious. Fighting out of Anchorage, Alaska, he has a 9-1 record with 4 KO’s and 3 submissions. Undefeated before entering the UFC, he was an Alaskan heavyweight champion and lost his first fight in the UFC via KO. Since the loss, he moved down a weight class to fight at 205 and has managed to grab 2 victories since. The light heavyweight has even mentioned that he might be able to make the middleweight 185 weight limit.

Glover Teixeira is a heavy favorite in this bout against Cannonier but in the UFC, that can always change. Cannonier has shown in his previous fights that he’s a tough fighter who prefers to strike but has a well-rounded game. In his fight against Ion Cutelaba he showed a slow start as the fight went on he turned the pace up and found his striking rhythm. He countered effectively and managed to pull off the unanimous decision win. Glover, on the other hand, is an entirely different type of monster and will be a real test for the UFC rookie. I think Cannonier bit off a little more than he can chew with this one. I have Glover Teixeira by TKO via punches in the first half of the fight.

Our Pick: Glover Teixeira By TKO

A true veteran of the sport, Dustin Poirier goes all the way back to the WEC days before the UFC had a featherweight division. Now competing at lightweight, Dustin Poirier has compiled a record of 20 wins with 10 KO’s and 5 defeats. Recently coming off a KO loss to Michael Johnson in September of last year, Poirier has never had two losses in a row and has some notable wins over high level fighters like Diego Brandao and Max Holloway. A pure mixed martial artist, he doesn’t find a technical background in anything specifically and instead looks to be as well rounded as possible despite his recent propensity to box.

Jim Miller currently holds the UFC record for wins in the lightweight division with 16. He was an NCAA division 1 wrestler in college and has a blackbelt in Brazilian Jiu Jitsu which makes him an extremely dangerous grappler. He has won the “Fight of the Night” award five times in his career, “Submission of the Night” 3 times and got “Fight of the Year” in his winning effort against Joe Lauzon in 2012. From 2014 into March of 2016, Jim Miller hit a rough patch in his career losing 4 out of 5 fights but since then has won three straight fights against impressive opponents. He TKO’d Takanori Gomi with punches, won a close split decision in a rematch with Joe Lauzon, and then dominated an overweight Thiago Alves to a unanimous decision win.

Dustin Poirier coming up from featherweight into his first fight at lightweight got knocked out by Michael Johnson. Jim Miller, on the other hand, has experienced a resurgence at lightweight with his last three wins coming from dangerous competition. They are both well rounded but I have to give a slight striking advantage to Poirier, while I give more than a slight grappling advantage to Jim Miller in this contest. I have Jim Miller via Submission in round 1.

Our Pick: Jim Miller By Submission Round 1