posted by Joe Miller on May 30, 2017 IN MMA Fight Predictions 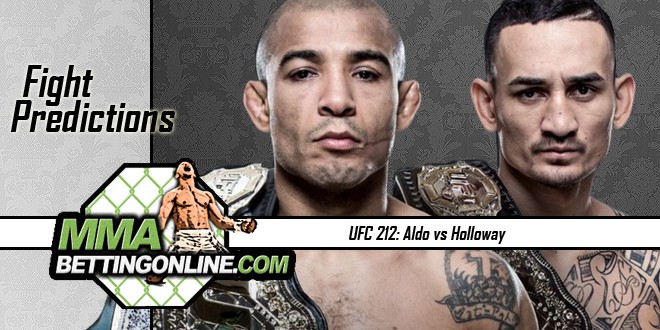 UFC 212 is upon us and there is certainly some excitement in store for fans. Below you’ll find my take on what I consider to be the top three most interesting matchups of the night, and what I predict will happen with each of them.  I base my opinion on being an MMA fighter myself, and the knowledge and experience I have gleaned along that journey.  Feel free to comment with your own insight, predictions or rebuttals. I also include the lastest betting odds for these MMA fights, acquired from trusted MMA betting sites.

Jose Aldo was the most dominant featherweight champion in the history of the division and he was dispatched by Conor McGregor in 13 seconds with what can be considered a huge fluke. The bottom line is that he has never been beaten down at featherweight over the course of a full fight and that’s what Max Holloway is going to need to do. Aldo looked physically stronger than ever in his fight in Frankie Edgar and if anything, he was just a bit too hesitant in his first fight after his loss to McGregor. I still believe he has the most developed skills in the featherweight division (especially now that McGregor looks as if he won’t be returning to the division) and his timing is incredible. I also believe he has the most dangerous weapons in the division after all this time and he’s been frequently quoted to be taking a more aggressive style against Max Holloway.

Max Holloway is the only person to face Conor McGregor in the UFC and not get finished inside the distance. Most believe that’s because Conor McGregor blew his ACL out in the midst of the fight and still finished a decision win against Holloway. He has since won 10 fights since his encounter with the Irish superstar and has been on a streak of impressive improvements in the recent past. He has a very mobile style in which he changes his stance on a very frequent basis to mix up his opponents. He sees a lot of success using his reach and movement and has an odd timing on his attacks which usually leaves his opponents to appear as if they are stuck in the mud. He showed in his last fight with former champion, Anthony Pettis, that he can finish fights and remains dangerous throughout the fight.

I think Max Holloway’s best chance at beating Jose Aldo would have been in his fight directly after his loss to McGregor. He seemed more tentative and overly careful and I think Holloway would have been able to take advantage of that a bit more than Frankie Edgar was able too. Aside from that, despite Holloway’s impressive skillset and climb in the rankings, he will now be facing a more dangerous Jose Aldo than ever in my opinion. His confidence is back, he looks stronger than ever, and his motivation to get another fight with McGregor is so palpable you can just sense the tension even when he says he thinks the fight will never happen. In this fight, I have Jose Aldo by KO/TKO.

Claudia Gadelha is a BJJ blackbelt under one of the most renown trainers in the world, Andre Pederneiras who also trains Jose Aldo. Karolina Kowalkiewicz was a standout amateur Muay Thai fighter in the international circuit coming out of Poland. Claudia is more of a grappler with forward pressure and hard hooking punches while Karolina is more of a technical striker who prefers to stay at distance and pick her opponents apart. Both of these ladies have fought the undefeated champion of the division and lost unanimous decisions. I see Claudia’s game plan for this fight as almost identical to that of the game plan she had for the champion. I believe he will look to land hard over hands and hooks while pressuring in for the takedown. She’ll look to power through a takedown and either ground and pound her opponent out or win via Submission. Karolina will most likely look to keep the distance and land long punches and kicks at volume, defending takedowns and breaking down her opponent over the course of a long fight.

In my mind, Karolina is very similar to that of Joanna Jedrzejczyk only just a bit less developed. Claudia had a hard time with Joanna but I think her plan will work a bit better on Karolina. The main questions to ask in this fight will be: Can Karolina stop the takedown? Can Karolina get back to her feet if she is taken down? Can Claudia close the distance without taking too much punishment on the way in? Can Claudia keep Karolina on the ground for enough time to finish the fight? I think yes, my pick is Claudia Gadelha by submission or TKO via ground and pound.

This is a fight that could have easily happened 10 years ago. Both of these fighters have been competing the UFC for well over a decade. Despite his age, Vitor Belfort is a fighter that I will never bet against. He is an aggressive and dynamic striker who has used spinning heel kicks to finish fights along with simple straight punch flurries showing how big his tool box really is. He has a world class ground game which he clearly prefers not to use and what is the most impressive is that at his age, he is still one of the most athletic athletes in the UFC. Nate Marquardt has a total of 54 professional MMA fights with a record of 35 and 17 and has fought the best athletes in the world for as long as I can remember. He is a well-rounded athlete with a 2nd degree blackbelt in BJJ under Ricardo Murgel and striking prowess enough to impressively KO Welterweight kingpin Tyron Woodley. This is one of the hardest fights to make a pick on because this fight is so well matched. Vitor still gets the speed advantage from me while I think Nate will probably be more prepared if the fight enters into a clinch. I’m just going to throw a dart with my eyes closed as say Vitor Belfort by TKO because that’s what I really want to see.