Rory MacDonald Finally Has A Fight! 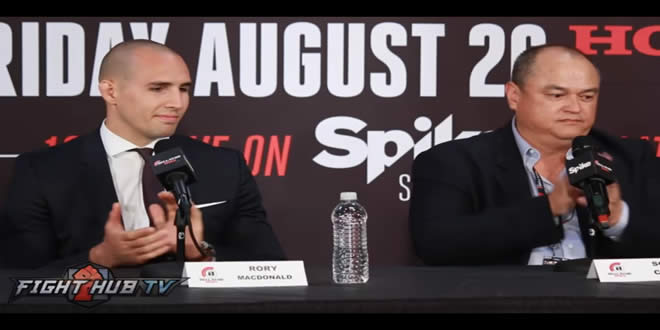 Finally, Rory MacDonald has his Bellator MMA debut set and it couldn’t be better. Bellator announced on Thursday that Rory MacDonald will face dangerous striker and former UFC title challenger, Paul Daley. The fight will happen in May at Bellator 179 in Daley’s backyard at the SSE Arena in London.

Rory MacDonald followed the recent wave of UFC fighters over to Bellator MMA as complaints of mistreatment started to pour over. It’s still uncertain why MacDonald left the UFC but there are various reasons why the change could have happened. Rory was on the heels of two back to back losses in the UFC as his contract expired but there’s no way to know how that impacted his negotiations. One of those losses was 2015 “Fight of the Year” with Robbie Lawler that might have been the best fight in MMA history, so it’s tough to imagine that it was the UFC that wanted Rory to leave.

It might have something to do with the sponsorship dictatorship that was imposed by UFC brass in form of Reebok exclusivity (with just a little Monster energy drink in there). In July of 2015 the UFC and Reebok signed a deal that imposed sponsorship martial law on all the fighters. They were no longer permitted to have any outside sponsor logos on their shorts or banners as they walked out to the cage. Famously the lowest paid professional athletes in the country, MMA fighters found the majority of their income on outside sponsors before the Reebok deal.

Brendan Shaub was one of the loudest critics of deal, stating that before the Reebok deal demoted him to the $10k bracket in sponsorship payouts, he was making well over 6 figures. With that kind of change in income it’s pretty obvious why so many fighters would make the move out of the UFC towards organizations like Bellator that still have freedom in terms of sponsorship. Still, no one can be sure why Macdonald made the move to Bellator but it has been estimated that he would make up to five times more money with the switch.

Paul Daley left the UFC for another reason entirely. After taking a decision loss to Josh Koscheck at UFC 113 the bell had rung and the referee was separting the fighters as Koscheck whispered some parting words into his opponent’s ear. A couple seconds later Paul Daley scooted around Dan Miragliotta and sucker punched Josh Koscheck with a left hook that landed cleanly on the wrestler’s right forearm block. After that, Dana White was livid, “He’s done… I don’t care if he’s the best 170-pounder in the world, he’ll never fight in the UFC again,” said the UFC promoter.

Paul Daley is long been known to be a dirty fighter and has frequently been deducted a point for things like eye gouging and has been known to grease up before fights. He is a one-dimensional MMA fighter relying on his world class striking ability. Rory MacDonald, on the other hand, is a complete MMA fighter with world class abilities in every aspect of MMA.

The two of them are set to square off inside the cage at Bellator 179 in London, England at the SSE Arena on May 19th.