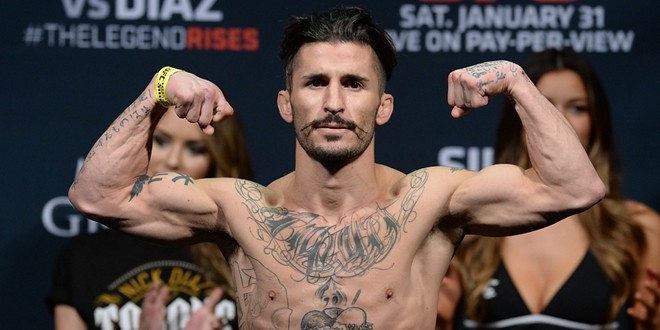 Apparently, Ian McCall had the easiest weight cut of his career ahead of his flyweight bout with Jarred Brooks at UFC 208. “I’ve never made weight that easily in my entire career,” said McCall on the Joe Rogan Experience podcast. He was subsequently removed from the card as a result of of an “acute medical condition” resulting from weight cutting with what they believed to be a severely contracted gallbladder. Joe Rogan responded to McCall, “you can’t say ‘I had the best weight cut of my life’ if you almost died.”

He has become known as the unluckiest fighter to ever fight in the UFC. This is the fifth consecutive time that a fight has been canceled for McCall for various reasons. Before he was set to fight Jarred Brooks, he was slated to fight Neil Seery at UFC 208 who pulled out just two weeks before the event. Jarred Brooks was given the short notice opportunity to step in and replace the Irish Neil Seery before McCall ended up in the hospital with a shrunken gallbladder. Having the term ‘unlucky’ tied to your name will likely not make you a favorite in the MMA betting lines.

Before UFC 208, McCall had to pull out of another fight with Neil Seery because of undisclosed illness that was also unofficially believed to have been in relation to a bad weight cut. On the podcast with joe Rogan, McCall explained that it was a health issue that started well before the weight cut began. “There’s something still tied to what happened in Ireland with me, and most people don’t know but I was in the hospital, 2-3-4 times, before that fight, with some vasovagal syncope where, like, my ah, esophagus would freak out and I’d end up passing out… this was in training camp for the Ireland fight [before the weight cut began].”

McCall’s previous opponent, Ray Borg, dropped out of their fight at UFC 203 because of an illness. Then, before that, Justin Scoggins announced that he wouldn’t be able to make the contracted 125-pound flyweight limit and the UFC scrapped that bout at UFC 201. He was also taken out of a bout with Dustin Ortiz at UFC Fight Night 73 with an injury directly after his last UFC appearance all the way back in January of 2015 in a unanimous decision loss to John Lineker in UFC 183. This is the most consecutive fights dropped out on any current fighter in the UFC. No record a fighter wants to have.

According to Ian McCall on the Joe Rogan Experience podcast he is going through every measure available to try and figure out what’s going on with his health. “We’re doing a lot of testing, we’re trying to figure out, they’ve done like, blood, hair, whatever else, you know…” Ian continued, “We’re going above and beyond, like, to check everything, we’re doing eastern medicine, like, all kinds of sh*t so hopefully within the next couple weeks I’ll understand … [at least] partially what’s wrong and we can fix it. Because I’m in amazing shape, you know, I’ve just had a really-a string of bad luck.”

They were closing in on the end of the discussion when Ian McCall said “I should probably get this under control before I cut weight and don’t come back from it.”

This “string of bad luck” wasn’t the first time that Ian McCall or other fighters have had serious health consequences related to extreme weight cutting. Until the issue of weight cutting is properly dealt with, it likely won’t be the last time either.