A Storm Is Coming To The UFC, And It Was Not Forecasted 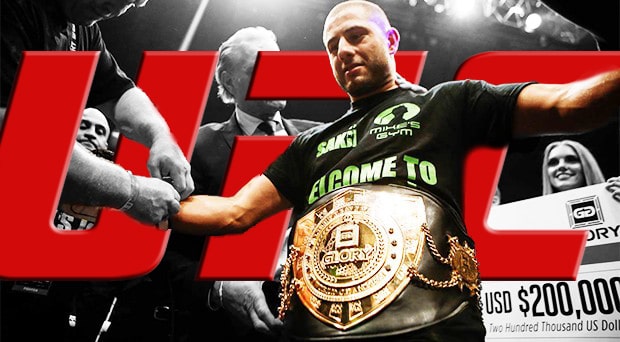 The light heavyweight division of the UFC just got shook up with a new acquisition by the company. Glory Kickboxing World Champion, Gokhan Saki, is one of the most feared strikers on the planet. He has more KO’s than most MMA fighters have total fights and has more titles than nearly anyone else in the light heavyweight division. He is currently 83-12 with 1 no contest and 59 of those wins resulted in KO’s. He won a Muay Thai world championship as early as 2003, a K-1 title in 2008 and in 2014 he won the Glory light heavyweight tournament winning the tournament title and the Glory World Lightweight Championship. He has been competing at the top of the international kickboxing circuits for over 20 years and has fought the best kickboxers in the world, including Alistair Overeem.

But why MMA? And why now? Gokhan Saki has only ever had one MMA fight, a fight which he lost. So, why make the switch when you are competing at the pinnacle of kickboxing and doing so successfully? The light heavyweight kickboxing kingpin commented on why in a public statement,

“After 5 months being kept on a line, for me it was done, i had a lot of other deals but i kept waiting to fight Rico or for Glory. The waiting is over, tired of it. Glory Kickboxing is playing politics to keep their ‘champion’ Rico Verhoeven safe for his renewal contract that had to take place end May or begin June. If he would lose against me, his position towards Glory would have been weakened. Rico Verhoeven and his team and also Glory did not want to expose their Champ to such risks.”

As it would seem, Saki got tired of waiting for the match up with current Glory Heavyweight Champion, Rico Verhoeven, and after passing up many opportunities he decided to move on with his career. Moving on to the most popular combat sports organization in the world wrould seem like a good move but in doing so he is also switching sports. This routinely begs the questions of his MMA training and how well he will be able to execute his striking once takedowns become a part of the game. He has been stated to have had some limited Judo experience but will that be enough to completely change sports? It is guaranteed that we will see how his perceived MMA skills are valued by the oddsmakers with the betting odds that will cover his fights.

There is still no word on when we see the UFC debut of the Turkish Tyson or when it will happen. According to his twitter account he has apparently signed a “long term contract” with the organization so we will soon be seeing a lot of the light heavyweight kickboxing champion in the UFC. Now we will get another definitive look into how well the quintessential striker can adapt to the changing circumstances and distances that are the challenges of MMA.