posted by Joe Miller on May 25, 2017 IN MMA Fight Predictions 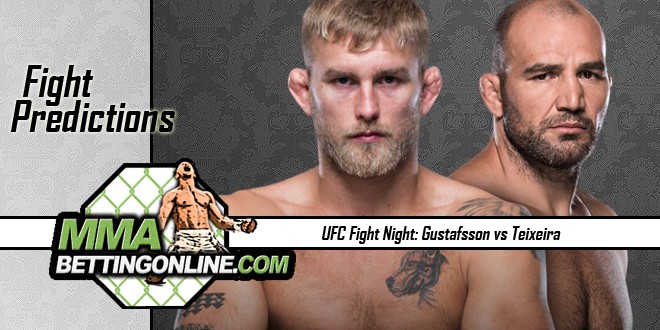 Alexander Gustafsson is the only guy to ever really come close to a legitimate victory over who many consider to be the greatest MMA fighter of all time, Jon Jones. He stands 6 foot 5 inches tall and holds a 3 inch reach advantage over his opponent, Glover Teixeira. Gustafsson has 17 wins with 10 of those wins by knockout, and only 3 by submission. Through that stat alone we begin to see how Alexander Gustafsson prefers to fight. He has been known for his incredible takedown defense, his under rated wrestling, his powerful right uppercut, and his unique ability to mix up his skills fluidly throughout a fight.

Glover Teixeira has an advantage in experience but both fighters have fought at the highest level in MMA for a long time. Glover is a second-degree black belt in BJJ under Luigi Mondelli but he has become known for close range arching power punches with 15 of his 26 wins coming by way of knock out. He likes to get close and rough his opponents up and then when they fire back, he drops for takedowns and uses his world class BJJ to set up strikes from the top in grappling exchanges.

Glover is the older fighter and I think he may be on his way out. With that said, his natural style of striking is precisely what Gustafsson wants to stop him from being able to accomplish. Glover’s best punches are tight hooks and overhands as he drives his opponents backs up against the cage. He thrives in the short distances. He’ll drive into his opponents and strike to get takedowns. Gustafsson has an 86% takedown defense rate against the best wrestlers in the world; I personally doubt that Glover will complete even one takedown in the fight. If his striking works he wouldn’t have too. However, I don’t think that it will. Gustafsson has become accustomed to everyone trying to change levels and crowd him with hard arching hook punches. It’s the general game plan when fighting someone taller with longer reach. Gustafsson is frequently the taller fighter with longer reach and he has developed an array of striking skills that compliment that. His best punch is his right upper cut. I think he will hurt Glover with a right uppercut as Glover moves in with an overhand to crowd the distance. My pick aligns with the betting odds for UFC Fight Night 109 and is Gustafsson by KO or TKO via strikes.

Volkan Oezdemir and Misha Cirkunov are relatively unknown in the spotlight of the UFC but have impressive records and nearly identical stats. Misha Cirkunov is the slightly bigger man with 2 inches of height and 2 inches of reach over his opponent but that may not be a huge factor in this fight because the notable striking advantage probably goes to Volkan. Volkan Oezdemir has 10 first round finishes and 69% of his wins have come by way of knockout. He’s a striker. Cirkunov, on the other hand, has a judo background and has 9 first round finishes of his own. Misha has ended 3 of his 4 wins in the UFC by submission and 54% of his total wins come by submission. The stats tell us that this is the classic striker vs grappler match up.

Another interesting fact in this matchup has to do with the rankings that they hold. Despite having more fights in the UFC, MIsha Cirkunov is ranked lower than Volkan Oezdemir. Volkan burst onto the scene with a short notice win over highly ranked former world title challenger, Ovince St. Preux. That allowed him to jump over Cirkunov in the rankings. His win over OSP is a fact that cant go overlooked because of how well OSP did in his fight against arguably the best MMA fighter of all time, Jon Jones. The questions to be answered in this fight are: Will Volkan Oezdemir be able to stop the takedown of Misha Cirkunov? Will Cirkunov be able to use his striking to set up a proper takedown on Volkan? Will Volkan be able to get back up to his feet if he is taken down? I personally think there is a higher likelihood of MIsha Cirkunov’s skillset prevailing here. My prediction is Cirkunov via submission victory by front choke.

Ben Saunders is a dangerous striker with long limbs that has finished 9 of his 21 wins by knockout. He trains at two of the most prestigious MMA gyms in the world. He splits his time between Florida at American Top Team, and with Eddie Bravo at 10th Planet Jiu Jitsu in LA. This is where his philosophy shows itself. Ben Saunders has all the natural advantages in striking and typically a striker like him would specialize in takedown defense and getting back up to their feet to keep the fight in the arena where they will have the most success, a popular example of this style is Joanna Jedrzejczyk. Ben Saunders has taken a different approach. He decided to start training under Eddie Bravo who is known for developing a new style of Jiu Jitsu that is particularly effective in attacking off the back. Instead of prioritizing defensive wrestling tactics to keep the fight off the ground, he has made himself equally as dangerous in those seemingly disadvantageous positions. You may be able to take Ben Saunders down, but you may not want too.

Peter Sobotta is relatively unknown in the UFC despite having fought eight times for the promotion. He’s German and Polish and fights out of Bisingen, Germany under one of the best grapplers in the world, Dean Lister. He made a run in the UFC back in 2009 when he lost three fights in a row and subsequently was released from the organization. He submitted five guys consecutively with first round rear-naked chokes in smaller organizations and was then accepted back into the UFC. Since then, he was won three out of his four UFC bouts. It might be pretty clear to see in my descriptions of each fighter, but I’m a Ben Saunders fan, and just like the MMA betting sites offering odds on this fight, I favor him for the win. I like his philosophy. My prediction: Ben Saunders by submission after hurting his opponent with strikes.