Bellator Vs. The UFC: A Paradigm Shift May Be In Store 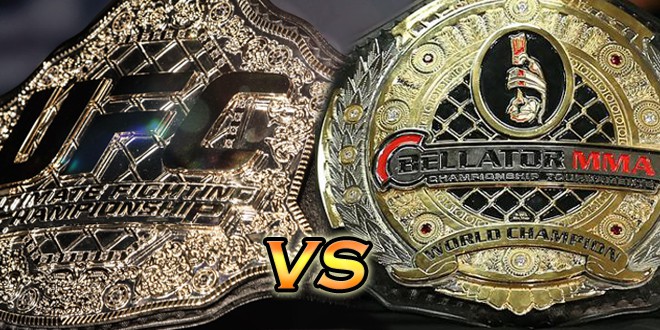 What the UFC has is what every organization is looking for. They have the belt, they are the champions of MMA right now and have been since the beginning. There is a reason that most people who don’t know anything about the sport utter phrases like “you do UFC?” which inform you on their lack of knowledge in the sport. The UFC has become synonymous with the sport of MMA to the laymen. They are the largest MMA organization in the world and are known universally as the premier league of mixed martial arts. They possess both the real and the perceived pinnacle of skill currently in MMA. Not only does this drive fandom, it also drives MMA betting odds.

When people watch the UFC, they trust that they are watching the best fighters in the world. Common observers and even fervent fans tend to accept that if there was better talent out there, the UFC would probably have found them by now, and that they are constantly searching for the new stars. While this is still probably more accurate than not, recent developments in the world of MMA have started to lead to a different conclusion.

The perceived pinnacle of skill in MMA is an important idea. This defines what the laymen interprets as the premier league. The NFL holds the perceived (and the real) pinnacle of skill in the sport of football as opposed to college level football which people tend to universally accept as a slightly lower level of play. The NFL is to the UFC as the sport of Football is to MMA. Now imagine there was another NFL, another organization that seems to rival the NFL in terms of skill, an organization that might eclipse the NFL at some point. That’s the position that Bellator might find themselves in with the UFC, soon.

The differences between the real and perceived pinnacle of skill are also important distinctions. The perceived pinnacle of skill is really a matter of marketing, but marketing alone can’t finish the job, the real skill must be there to be marketed. Ultimately, however, the perception of having the pinnacle of skill rests in the minds of the laymen, or casual fans of MMA. This principle rests solely on the talent of the fighters themselves inside the organization. Currently, the UFC still holds both the perceived and (most of the) real height of skill in MMA, but they began losing it slowly when they signed the infamous Reebok sponsorship deal.

The UFC’s Reebok sponsorship deal might have been the best thing to ever happen to Bellator. The sponsorship deal limits all fighters in the UFC to a Reebok sponsorship (and a few other sponsors specifically chosen by the UFC and allowed by Reebok). This may not seem like a big deal to most people, but it is when you consider how most MMA fighters made the bulk of their money in each fight prior to the deal. Popular outspoken former UFC fighter, Brenden Shaub, has publicly stated that he lost the potential to gain hundreds of thousands of dollars in outside sponsorship money from each fight when the deal was inked. He wasn’t the only fighter to express that sentiment either. Since the deal was inked, several high-level UFC fighters and even some former UFC world champions have made the switch over to Bellator, publicly stating that it is more lucrative for them and their families, the most recent of which is Rory MacDonald, a fighter with more than 10 fights in the UFC. Other fighters that made the switch are former champions like Quinton “Rampage” Jackson, Benson “Smooth” Henderson, and Wanderlei “The Axe Murderer” Silva.

With all these top-level fighters migrating from the UFC to Bellator we can see that the UFC is starting to lose what makes them so great. The real pinnacle of skill. While they still maintain most of it, Bellator is creeping in slowly and it seems like that slow creep is starting to speed up since the UFC was sold for 4 billion dollars to WME entertainment. Since the entertainment company took over, there have been a series of lackluster events and some curious marketing strategies employed. We have also witnessed a new first in the world of MMA and for the UFC, which is the fact that they seem to be allowing Conor McGregor to cross over into the sport of boxing to compete against Floyd Mayweather. A mega fight, undoubtedly, that might be another sign of the company’s desperate grab for cash.

What grants the UFC the common perception of having the pinnacle of skill is partly from their history, but is mostly because they actually possess the real top levels of skill in MMA. Whatever amount of that they have lost to Bellator, it still remains mostly in the hands of the UFC for the time being. As that paradigm starts to shift towards Bellator, coupled with the curious strategies of the new owners, we could very well start to see a shift in both the real and perceived premier league in MMA.