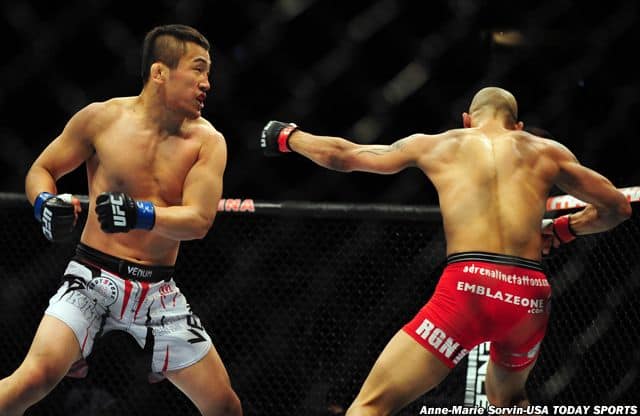 South Korean authorities have begun investigating UFC fighter Tae Hyun Bang for fixing a fight in his lightweight bout with Leo Kuntz in 2015 at UFC Fight Night 79 headlined by Jorge Masvidal and Benson Henderson. This is the first time that there has been an official investigation into fight fixing within the UFC.  In the hours leading up to the prelim fight between Tae Hyun Bang and Leo Kuntz, there was an overwhelming shift in the odds as a result of some heavy bets coming in to favor Kuntz. It was reportedly one of the most drastic last minute shifts in MMA betting odds that the UFC has ever seen and it rightfully made the UFC leadership a little nervous. This shift also impacted Vegas sportsbooks and the legal MMA betting sites that were covering the event.

Leo Kuntz was quoted in the matter on MMAJunkie.com, “The UFC seemed like they knew something was definitely not right,” Kuntz continued, “they told me it was the largest odd swing they’d seen in MMA and last minute. They told me, ‘Hey, if either one of you guys goes out there and doesn’t fight, you should prepare to be investigated.’” Kuntz denied any involvement in fight fixing and as you might expect, so did his opponent, Bang.

The fight itself certainly didn’t appear to be fixed at first glance. Early in the first-round Bang caught Leo Kuntz with a looping left hook that sent him crashing into the mat and then jumped on the fighter in an attempt to finish him with powerful hammer fists as Kuntz scrambled for a takedown. Bang then transitioned into a textbook guillotine choke and had it locked up in a way that many fighters have not been able to escape in the past. The choke was tight, Bang even repositioned for a better angle when the choke was somehow loosened and Kuntz escaped. This could very well be due to fatigue in the arms as Bang was very visibly grimacing in his face as he attempted to finish the fight with the choke. It’s also worth noting that Bang has never won a fight by submission in all his 18 professional wins.

The fight was awarded to Tae Hyun Bang via split decision and thus contradicted any suspicions that he may have been paid to throw the fight. But wait, Tae Hyun Bang was reported to have bet nearly $44,000 dollars on his opponent before the fight, which caused part of the odds swing. What kind of fighter bets against himself? The other part of the odds swing that caused the initial suspicion was the reported $1.7 million dollars that was wagered on Kuntz by “Korean Brokers”.

So, what happened here? It’s obvious that Bang took a bribe to throw the fight, but why didn’t he go through with it? As one Korean report confirms, Bang did indeed take a bribe to fix the fight for Korean Gangsters but had a last-minute change of heart as a result of talking with the UFC officials. It seems that he became aware that they were suspicious of his fight manipulations and decided to back step and take the fight seriously in fear of investigation by the UFC after the fact. It makes you wonder what kind of power the UFC holds that would rival that of the Korean Mob, but that’s a different story.

It has since been reported at multiple online sources that Tae Hyun Bang accepted a bribe of roughly $88,000 dollars, $44 thousand of which he used to bet on his opponent in an obvious sign of fight fixing. He is now cooperating with Korean authorities after allegedly receiving multiple death threats form the “Korean Brokers” that he accepted the bribe from.

Bang has fought only once since then, at UFC Fight Night 93 where he lost a unanimous decision to Nick Hein.