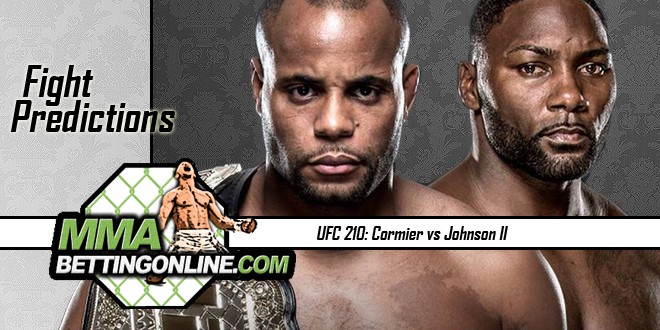 I decided to give you guys some insight into three upcoming fights that have me pretty excited.  These events are taking place over the next few days and if you’re thinking of laying down some bets on them then I hope these predictions help you in making your decisions. You’ll find a preview of the fight, my personal predictions and the odds at the time of this writing. For the current odds in real time, visit our page on MMA betting odds.

Daniel Cormier is a former multiple organization world champion and is popularly regarded as one of the best wrestlers currently in MMA. The most prominent memory I have in the recent past is of Daniel Cormier picking up Josh Barnett, one of the best catch-wrestlers in the history of MMA, with a high-crotch takedown and flipping him like he was a stuffed animal. He’s known for incredible physical strength and his intelligence in the octagon. His kickboxing skills are highly developed and rival even some of the best kickboxers in the world outside of the sport of MMA. Cormier has been in almost constant tension with former champion, bitter rival, and the only man to defeat him in the cage, Jon Jones.

Anthony “Rumble” Johnson might be the most terrifying light heavyweight in the world. He was a wrestler in college but really makes Rumble scary is the explosive power and prowess in his striking. He is known as one of the most violent strikers in MMA and is popularly feared for his speed and unpredictability. Although he has been known to get takedowns, he is typically known to use his wrestling in reverse in order to increase his likelihood of a KO win. What’s most remarkable about Anthony Johnson’s recent activity is the fact that in every fight that he has won since 2014, he has done so by vicious KO in the first half of the fight and has won Performance of the Night bonuses in each of those impressive wins.

The first fight between these two does a really excellent job in highlighting the strengths and weakness of each fighter, particularly, Anthony Johnson. Johnson’s style of fighting relies on lightning fast explosions and forward pressure standing up. His speed is unrivaled in the Light Heavyweight division. This style of fighting along with the physical make up of Anthony’s body makes for a tiring style. The major strength that comes from this is probably the most terrifying strength to have, vicious knockout ability. The major weakness, however, is that he typically lacks the ability to fight at his most successful pace for longer than the first half of the fight.

This leaves a giant opening for Daniel Cormier. It also plays into Cormier’s natural grinding style as a high level former Olympic wrestler. In their first fight, Johnson rocked Cormier earlier with an overhand and it looked like the night would be over for Daniel. In that moment, he displayed his most effective combative quality, in my opinion, and it’s not his wrestling. It’s his mental acuity in pressure situations. When he took the punch he started to move back and gather himself immediately, as Rumble came forward, Cormier used his aggressiveness against him and slipped under a wild punch to take Johnson’s back in a clever way that made me wish for a rewind button while watching it live. Despite moments of extreme danger, which persisted throughout the rest of the fight, Cormier was able to out wrestle and tire out the younger and more explosive fighter. Cormier won a unanimous decision victory.

Since then, Johnson has simply not been given the opportunity to show that he can stop this type of attack, he’s knocked all of his opponents out too quickly. My brain says Daniel Cormier will do what he does best and grind out another decision victory to retain his title and wait for that Jon Jones rematch in the future. However, my gut says that Anthony “Rumble” Johnson wins this match by KO within three rounds and receives a Performance of the Night bonus in doing it.

Chris Weidman was the best guy in the UFC that you have never heard of before he ended the reign of middleweight legend Anderson Silva. He was an NCAA Division I wrestler, a two time All American, and holds a black belt in Brazilian Jiu Jitsu under Matt Serra and Renzo Gracie. He was undefeated before he suffered his first loss to Luke Rockhold in his 14th professional bout. He was subsequently KO’d with a flying knee from Yoel Romero in his next fight which put him in a very interesting position as fighter. He has suffered two stoppage losses after going undefeated and the questions around his mental status and motivations are starting to appear.

Gegard Mousasi has had a long professional career and has fought among the best fighters in the world for over 20 years. He has competed at the highest level in both kickboxing and MMA and is a four-time world champion in multiple organizations. Nicknamed “The Armenian Assassin” he has developed a reputation as a skilled grappler. On his feet, he is extremely calm and ready to explode at any moment. Mousasi has competed professionally in international kickboxing circuits against some of the best kickboxers in the world and although he seems overly calm, his striking is at a very high level and is extremely dangerous.

This matchup is loosely a grappler vs. a grappler although both of these men have top tier striking abilities that have been proven in the cage. I personally believe that Gegard Mousasi has the better striking skill set but that is really a tossup because Weidman knocked out arguably the greatest striker in the history of MMA in Anderson Silva with his striking. Weidman is coming off two losses which were the first two losses of his career and were particularly brutal, and consecutive. Mousasi, on the other hand, is currently on a four-fight win streak with his last three coming by way of stoppage. Weidman has been shown to have a weakness off his back when he fought Luke Rockhold and if Gegard can take him down and hold him on his back he may be in for a bad night. However, I think the losses made him harder. Chris Weidman by TKO via ground and pound in round 2.

Thiago Alves vs Patrick Cote could have easily been matched up for UFC 55 with both of these guys being around since the mid-2000’s. Both Thiago and Patrick have developed reputations for their dangerous striking skillsets over the years. Thiago has shown a more explosive style with punishing leg kicks and a furious finishing mentality that took him all the way to top when he challenged Georges St. Pierre for the welterweight Championship at UFC 100. Patrick Cote will land a heavy bomb and grind you out. He is a well-rounded fighter who seems to think he can submit Alves based on his recent interviews. His style of striking relies on an accumulation of damage dealt and a comfort for wherever the fight may take him.

Thiago Alves is a brown belt in BJJ under Ricardo Liborio and has been training with the world renowned American Top Team in Coconut Creek, Florida for his entire career. He is 21-11 with 12 knockouts, 2 submissions and 7 decisions.

Patrick Cote is a black belt in BJJ under Fabio Holanda. He fights out of Brazilian Top Team Canada and fights out of Montreal, Quebec, Canada. Over the course of his long professional career he has compiled a record of 23 wins and 10 losses with 10 knockouts, 3 submissions and 9 decisions.

My pick for this one is Thiago Alves by KO in the first half of the fight, because if he doesn’t get the KO early, Patrick Cote will likely win the decision.