Demetrious Johnson Has Had Enough 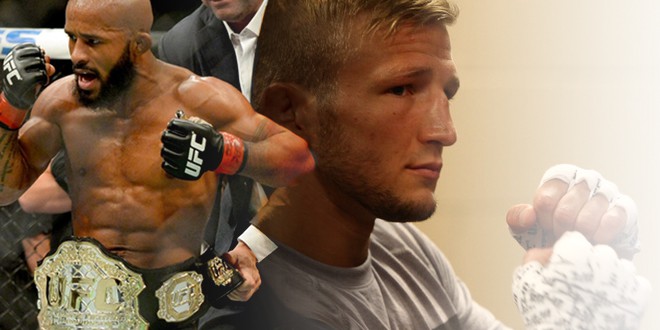 This isn’t the first time that the UFC has been accused of poorly treating their athletes. Throughout the history of the UFC there have been complaints from various fighters about how the UFC treats them. It goes all the way back to Tito Ortiz and Dana White’s famous feud and beyond and reaches up through the Diaz brothers and until this very moment with Demetrious Johnson’s latest complaint.

The flyweight kingpin, Demetrious Johnson, has been fighting for the UFC since they purchased the WEC and has remained the only flyweight champion in the history of the division. He is widely considered to be the best MMA fighter on the planet with his #1 pound for pound ranking and among most people in the know, this is an obvious truth. He has defended his belt 10 times and has currently tied the record for most title defenses in UFC history. He has made it clear through several media outlets and his own social media that holding the record for most title defenses in UFC history is very important to him. This record is also important to the oddsmakers creating the lines at licensed MMA betting sites.  We are likely to see some extra lines and prop bets surrounding Johnson’s title defense emerge as his fight draws near.

The best fighter in the world has added his name to the complaint in the UFC’s HR department. He has released a statement on social media that explains in detail how poorly the UFC has been treating him and exactly what manner they have been doing so. The statement is long and reflects the intelligence and attitude of the champion. Here’s a summary of what happened according to Demetrious Johnson.

One of the UFC’s matchmakers, Mick Maynard, called Demetrious to offer him the obvious next fight for him in the flyweight division, Ray Borg. He adds that he thought Sergio Pettis was a better fight because he had a more marketable name established. The flyweight division is known for lacking notoriety and Pettis would be a suitable pick because of his latest winning streak. After Mick consulted Dana he returned to say that Johnson had no choice in the matter and would fight Ray Borg. He goes on to explain his negotiations for PPV points and a potential fight with Cody Garbrandt, but as we now know, Garbrandt is out with a back injury, a point we will revisit later.

After a negotiation with Mick Maynard for PPV points on his flyweight fights after he beats the title defense record, Mick brings it back to Dana telling Demetrious that it sounded reasonable. Mick then returned with Dana’s response, Johnson would not be getting PPV points on any flyweight fights and he will be fighting Ray Borg. Johnson then indicated that Mick Maynard knew he was being mistreated and had to merely follow orders.

Sean Shelby, another UFC matchmaker, called and informed Demetrious and his team that the flyweight division doesn’t provoke enough income to be awarded with PPV points. He went on to add that a Cody Garbrandt fight would be an unsellable fight, to which he disagreed. He continues to go on a tirade about how the UFC doesn’t devote enough attention to marketing the flyweight division. He offers a possible explanation that it happened as a result of the marketing efforts being pushed more to promote female MMA instead of the division that houses arguably the greatest fighter of all time.

He then continues, after he accepted the fight with Ray Borg despite the horrible treatment, Cody Garbrandt hurt his back and TJ Dillashaw starts talking about a fight with Demetrious. The UFC shifts their attention to that matchup and decides to scrap the Ray Borg fight. Johnson disagreed saying that TJ has never made the weight and if he doesn’t, it won’t be a title defense, and he won’t be breaking the title defense record in beating him. The UFC offered him no monetary upside according to him either.

He went on to communicate his reasons for not accepting that fight to Dana and Dana refused telling Demetrious that he was going to be fighting TJ. Dana White was then reported by the champion to have threatened to dismantle the entire flyweight division if he didn’t take the fight with TJ.

He then goes on to detail the further fight negotiations between himself and Mick Maynard that surrounded the possibility of TJ missing weight. They guaranteed, of course, and then informed the champion that Ray Borg would be fighting on the card and would fill in for TJ if TJ didn’t make weight. The obvious unprofessional side effects of fight deals made in that fashion stirred the obvious questions as the champion went on to outline in his post. This is the first time the quiet and humble flyweight champion has spoken up about any mistreatment but he has since mentioned some small mistreatments in the past unrelated to this one, indicating that it has been going on for a long time. It possible that this is only the beginning.