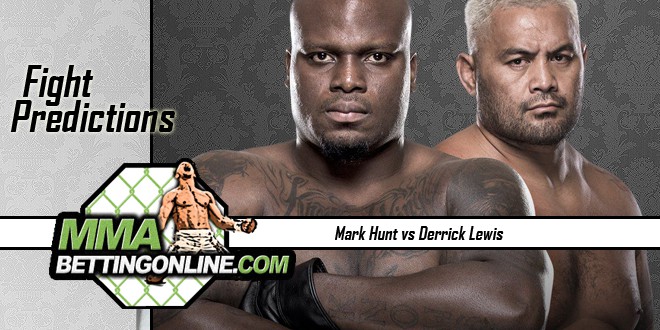 This weekend in Auckland, New Zealand, the UFC Fight Night crew will bring you two of the largest and most dangerous men squaring off for your combat sports entertainment. The heavyweight division always reaps attention for being the most violent and dangerous weight class in combat sports. It’s no secret that people love to see the largest fighting men in the world face off for the highest likelihood of spectacular finishes and unforgettable drama. This weekend we get to see two of the most current and dangerous heavyweight strikers on planet earth fight each other. Derrick Lewis and Mark Hunt with face off and neither of these fighters have shown much of a propensity for grappling. The odds are set, slightly favoring Derrick Lewis at all the popular betting sites covering the Lewis vs Hunt showdown. However, my take on things is a little bit against the odds.

Mark Hunt has become known as the king of the walk away KO. In MMA, punches that hurt and drop athletes are typically followed up with a few shots to seal the deal on the ground. MMA athletes that find themselves in this position usually rush to finish the fight in fear they may lose the opportunity for a highlight reel knockout. Mark Hunt, on the other hand, never feels the need to follow his opponents to the ground. He knows as soon as his punch lands that it’s enough to end the fight and he has done so on more than one occasion. For a good example of this, look up his fight against Stefan Struve.

“My game plan is simple, man, I just go in there and try and knock your face off” – Mark Hunt

His game plan is never a mystery. Every fighter that gets slated with Mark Hunt knows exactly what he is going to do and usually still can’t stop it. Fighters have been quoted after fights about the power in his punches noting that it was the hardest they have ever been hit, on multiple occasions. This is especially impressive when you consider that he is within the hardest hitting division in the world. He’s a plodding striker that fights at a terrifyingly calm pace. He was the K-1 World Grand Prix Champion all the way back in 2001, which is the highest honor an international kickboxer can attain. He was 30-13 with a world title under his belt before he retired from kickboxing.

Hunt began his career in Mixed Martial Arts fighting in PRIDE Fighting Championships against some legends of the sport. There in Japan, he faced and defeated guys like Wanderlei Silva and Mirko Crocop over 10 years ago. Since then, he has fought the biggest names in the game and has had highlight reel knockouts over Stefan Struve, Roy Nelson, Antonio Silva, and Frank Mir. His takedown defense has been developed under fire in some of the best conditions that it could be developed in. Like I said previously, no one is under any illusions of what Mark Hunt’s game plan is and people have been trying to take him down for years. That fact, however, may be irrelevant in this next fight with Derrick Lewis.

Derrick Lewis is widely regarded as the funniest heavyweight on the roster with commentators and interviewers constantly recommending his apparently hilarious Instagram feed. He was born and raised for the most part in New Orleans, Louisiana and grew up sparsely becoming involved with boxing and getting into the trouble that young guys do. He was later given a full scholarship to Kilgore College for football based on athleticism and went away to college. Unfortunately, he was never able to make a huge dent in his football career because he violated his probation and was sent to jail for three and half years. He found his first introduction into prize fighting only one week after he was released from prison.

Derrick Lewis is on a 6-fight win streak where he has on more than one occasion, personally called out of his opponent. He got his start in MMA back in 2010 when he fought on the Worldwide Gladiator promotion earning a win via TKO and developed an addiction for MMA. Before his first win in MMA he was considering a career in boxing under the tutelage of George Foreman, but with the first win being so sweet, he decided to stick to MMA. Since then, he has compiled an 18- 4 record with 16 KO’s and 1 submission and won and defended the Legacy FC Heavyweight Championship before being signed to the UFC. He is a bruising striker and relies pretty heavily on his looping blitzkrieg attack. He finishes about a third of his takedown attempts but where he really succeeds in grappling is in the scrambles. He seems to have such an overwhelming amount of strength that he has been able to simply muscle his way out of bad situations. He is usually only a bit tentative as heavyweights are but has been known to be wildly explosive, athletic, aggressive and punishing in his flurries.

Coincidentally enough, these fighters are extremely similar in style. Mark Hunt has a vast experience advantage with his time in kickboxing on the international stage but Lewis has had more MMA fights. That shouldn’t matter however, because this fight is heavily predicted to stay far outside the realm of grappling. Which would probably be an advantage for Mark Hunt for the same reason but Derrick Lewis has a 5-inch height advantage and a 7-inch reach advantage. These are massive physical advantages that can’t be overlooked and might play a major role in this right. However, Mark Hunt is used to being the shorter fighter, standing only 5 feet and 10 inches tall in the heavyweight division. One of his famous walk away KO’s was over one of the tallest men in MMA, Stefan Struve, who is 7 feet tall and had a 12-inch reach advantage.

Mark Hunt has been known to “not show up” for his fights on rare occasion. His record of 12-11 would indicate that he has a habit of having “off-nights” in big fights and that might be a factor in this fight too. He has said in interviews that he often has trouble getting out “2nd gear” and against a guy like Derrick Lewis, that could mean brain trauma of the highest caliber.

Derrick has been quoted in interviews by Brian Stann during commentary in his fight against Roy Nelson that he tends to have trouble with strikers more than with grapplers. If this is the case, and Mark Hunt is able to get himself out of 2nd gear, he may have a good night on his hands.

Both of these men are a bit flatfooted in their stances and rely pretty primarily on their punching power. Mark Hunt is the more seasoned striker and has been seen to use a more nuanced striking application to MMA than Derrick Lewis. This can be seen in their fights with Roy Nelson. Derrick Lewis went through a battle with Roy and ended up winning a closely contested split decision, a fight in which a lot of people would have handed the win over to Roy for dominant grappling and takedowns. Lewis, however, did a lot more damage in the fight and was dangerous throughout the fight when he wasn’t stalling for rest or down on his back. Mark Hunt’s fight with Roy Nelson went a bit differently. They battled for a little while but shortly into the fight, Hunt noticed a critical flaw in the stand-up game of Roy Nelson. He was ducking his head to his right in exchanges. Mark noticed the opening and immediately went to leading in with a right uppercut. He clipped him a few times but never clean enough. He just kept going back to it. Eventually he found the perfect right uppercut and ended the night for Roy in spectacular fashion with another one of his devastating walk away KO’s in the second round.

Roy Nelson is widely praised for having an iron chin and he took Derrick Lewis’s cleanest right hand over the top and didn’t even wobble. So, in this sense, I’d have to give the punching power advantage to Mark Hunt. I’d also have to give the striking prowess advantage to Mark Hunt, and being as both of these fighters rely primarily on their striking skill and punching power, I guess this means I’m taking Mark Hunt to win this one by KO. But anything can happen in this sport and the overwhelming consensus among pros is that Derrick Lewis is the younger and hungrier fighter. Some of the top guys see Mark Hunt as on his way out while Derrick Lewis is young and on his way up to the top. I’m sticking to my guns on this one and ill even take it a step further, Mark Hunt by vicious walk away KO in the second round.

You can watch any shiftings in the numbers by following odds on the fight updated in real time.