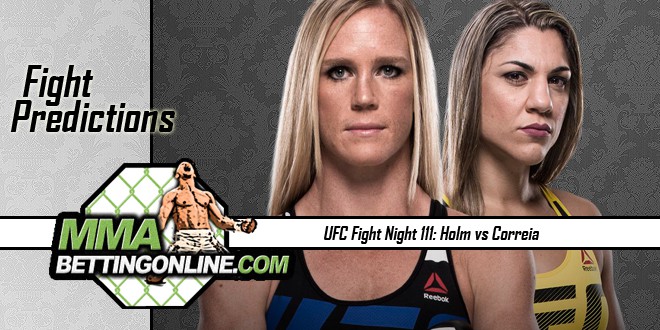 Singapore sees its second UFC event this weekend with UFC Fight Night: Holm vs Correia. Holly Holm will be coming back down in weight to 135 pounds to fight former title challenger, Bethe Corriea. Holly is fresh off of the only 3 losses in her career since knocking out Ronda Rousey and is jumping right back in the mix by fighting the #11 ranked female fighter at 135 pounds. On this fight card in Singapore we also have the privilege to watch one of the most experienced fighters on the UFC roster take the octagon. Andrei Arlovski will face Marcin Tybura in what promises to be a heavyweight match up full of fireworks and fisticuffs. Here are my personal predictions on those two match ups. You can also check the fight matchup odds in real time to monitor any shifting that occurs as UFC Fight Night 111 nears.

Holly Holm is one of the best strikers in UFC history despite her recent rough patch. She has lost three fights in row since delivering the upset of the century when she knocked out the Mike Tyson of women’s MMA, Ronda Rousey. Before Holly Holm made the professional transition into Mixed Martial Arts she was an accomplished combat sports athlete in Boxing and Kickboxing and held several world titles. She was 38-2 as a professional boxer and won the so many titles from so many organizations it’s fair to say she was one of female boxing’s best fighters ever. She trains at one of best gyms in MMA, Jackson Wink MMA. She knows how to grapple but likes to keep the fight standing. She excels when she is moving backward and letting her opponent come to her. Her style is one that relies on counterpunching as an overly aggressive fighter comes forward.

Despite being characterized by popular MMA personalities as an aggressive brawler, Bethe Correia hasn’t been seen to come forward with the aggression that is normally attached to Brazilian fighters. She is very aggressive in her grappling and wrestling but she has been analyzed as a slow starter and in her fight with Marion Reneau she seems to have been a bit more cautious when closing the distance. She was also easily pushed onto her back leg, moving away, against Jessica Eye in her previous fight before that. It will be interesting to see if she will charge forward and be aggressive on Holly Holm, which is exactly what Holm wants or if she will stay back and force Holly to come to her.

The overall questions I have for this fight with Holly Holm is how she will handle her recent failures mentally. She had a frustrating performance with Germaine De Randamie in her last fight at 145 pounds, and in her fight before that with Valentina Shevchenko as well. With Bethe Correia, I wonder how she will choose to fight. If her coaches agree with my assessment of Holly, she will step backward and force Holly Holm to come forward and close the distance and use her own counter punching to take away Holly’s greatest asset. I don’t believe that will happen, however, my bet is on Holly Holm by KO.

Andrei Arlovski’s first fight with the UFC was at UFC 28 in the year 2000. That’s how much experience he has. He’s 38 years old from Belarus and has developed a reputation for technical striking and devastating power. He has been criticized in the past for being slow and patient in his fights but since he came back to the UFC at UFC 174 he’s knocked out Antonio “Big Foot” Silva and Travis Browne with other notable wins over Frank Mir and Brenden Shaub. She shares a training space with Holly Holm at Jackson Wink MMA in Albuquerque, New Mexico and has been training with the best fighters in the world for decades. He is coming off 4 straight losses all of which he was finished in one way or another which begs the question, has Andrei Arlovski seen his best days in the octagon or does he have more left in him?

Marcin Tybura is a 31-year-old fighter from Poland that has a 17-2 record with 13 of his wins coming inside the distance by either knockout or submission. Tybura has become known for his advantages on the outside with his striking and his clever and tricky kicks. He has a real fluidity with his left leg that allows him the distance he needs to land his chopping right straight punch that comes in a weirdly downward angle. His main criticisms have come from Dominick Cruz in commentary of his last fight when Cruz noted on several occasions that Marcin was unable to secure under hooks as his back was pushed up against the cage rendering him pretty hapless in that position. Despite not being able to escape the position he landed some great elbows from there which proves he is dangerous in any position.

I don’t believe Andrei Arlovski will try and push Marcin up against the cage and hold him there so Marcin’s main weakness in my eyes is a moot point for this fight. Instead I believe Arlovski will try and do what he has always done, fight from a boxing distance and land big right hands and left hooks in sequence in the midst of a counter or when he has successfully closed the distance. Tybura fights well from the outside and has long legs and tricky kicking techniques. While Arlovski has tricky techniques of his own on top of decades of experience, I think he’s lost a step as of late and its time the Belarussian legend to retire. My bet is on Marcin Tybura by KO.