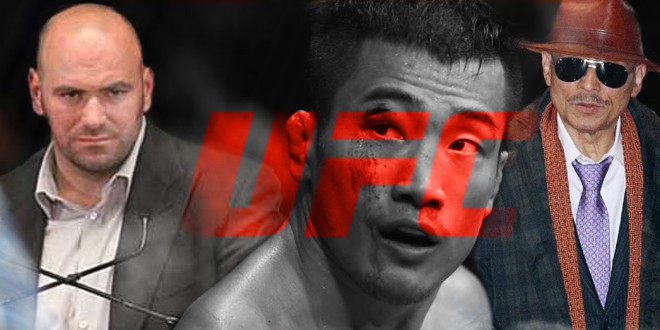 If you haven’t already heard, the UFC officially had its first fight fixing scandal in the 23-year history of the organization. In November of 2015, at UFC Fight Night 79 there was a bout between Tae Hyun Bang and Leo Kuntz that didn’t appear to be fixed to the casual fan. It didn’t even appear to be fixed by the eye of the MMA expert and that’s because it kind of wasn’t? I mean it definitely was, but the fighter who was supposed to throw the fight had a last-minute change of heart and decided to fight as if he had not been paid by Korean gangsters to lose. What made it even more impossible to prove was that Tae Hyun Bang, the fighter accused of taking a dive in the fight, actually ended up winning a closely contested split decision.

As the story has been told by most of the popular MMA news sources, Tae Hyun Bang was contacted in the months leading up to his fight with Leo Kuntz at UFC Fight Night 79 and was given an offer that he apparently couldn’t refuse. Approximately $88,000 was then handed over with the idea that he was going to throw the fight at the request of the Korean gangsters who paid him. A profound detail to this story is that Tae Hyun Bang himself actually placed a $44,000 bet on his opponent right before the fight and no one even batted an eyelash until he turned himself into Korean authorities just last month.

The night of the fight, the bets started rolling in and It was reportedly one of the largest MMA betting odds swings in UFC history. It was enough to alert the UFC brass to a potential scandal. They approached both fighters in the locker room before the fight and had a stern talk with them about fighting a real fight. They were quoted to have threatened each of the fighters with investigation if the fight appeared as if it was fake in any way. A Korean news source cited this as the reason Tae Hyun Bang went out into the octagon and fought to win instead of trying to lose for the Korean gangsters who were involved. As you might imagine, these guys didn’t like the fact that they bet over a million dollars on a fixed fight only to lose the bet to a split decision win that they didn’t pay for. Now, years later, Bang has turned himself into Korean authorities out of fear for his life.

OK, those are the facts. Now, let’s get into the fun part. My friends have come to know me as the “Master Speculator” because I enjoy speculating on fringe elements in fights that no one could ever definitively confirm. I’ve personally been in the MMA community for over 13 years and have had over 30 fights, I just had my 10th professional fight and my first professional MMA fight. The bulk of my experience lies within Muay Thai, aside from a few amateur MMA fights I had.

The speculations you are about to read draw upon my personal experiences in the ring, my understanding of this industry from a fighter’s perspective, and my desire to understand the human condition. Let me take a moment here to reaffirm something. I am presenting speculative theories in this article. I simply could not confirm these things without directly interviewing Tae Hyun Bang, which is unfortunately not going to happen. If you’re reading this and want to corroborate or totally deny my theories, I welcome your comments.  The speculations that you are about to read are shared with you to spur interesting thoughts and engaging conversations.

My theory is rife with contradictions and it heavily relies on the idea that Tae Hyun Bang was fraught with an inner struggle as he fought Leo Kuntz. It bases itself on the fact that Bang didn’t just totally decide to fight to win after the UFC execs gave him a stern talking to. Instead, he was faced with the dilemma of having to make it look inexplicably real while still satisfying his (probably) murderous and unscrupulous counterparts.

Here’s the scene. It’s the moment after the UFC executives have let It be known that they are skeptical about the fight’s legitimacy based on the odds swing in his opponent’s favor. The spotlight for suspicion is heavily upon Tae Hyun Bang. Bang sits in the locker room and now has a real dilemma on his hands. Maybe his plan was to get choked out in the first round. That’s a relatively safe bet for him because he wouldn’t sustain any real injuries and it’s also a relatively painless way to go out in a fight. Now that he knows they will be suspicious, he can’t do that. It’ll be too obvious. He’s got to satisfy the UFC’s requirement for a real fight while also satisfying the Korean gangsters requirement for him to lose.

Now, Bang is walking out to the fight and he doesn’t know what to do. He is in a real pickle. He has to maneuver carefully to come out of this fight without legal action by the UFC and his home country of Korea or any potential negative conflicts with Korean mobsters that may result. A Korean gangster and a UFC official appear in Tae Hyun Bang’s conscience like an angel and a devil on his shoulders and they are in a heated argument with each other, trying to influence what he will do.

This is where my initial speculation takes form. He had nothing to lose. As he comes out in the first seconds of the fight it appears as though he has no care in the world for getting knocked out. After studying most of his other fights I’m aware that he barely throws any strikes in the first minute of the first round, (watch his fight against Taisumov, and his latest fight against Hein). In this one he seems to come out guns hot and ready to throw down. No acclimation period needed. The thought that “getting knocked out isn’t such a bad outcome” may be at the forefront of his thoughts because he knows that at least it won’t look suspicious.

It goes the other way and results in his almost immediate destruction of Leo Kuntz with a left hook and it’s here that I saw the first moment of an inner struggle. The UFC official on his shoulder is yelling “FINISH HIM!” while the Korean gangster on his other shoulder is fervently urging him to hesitate. It’s here that the Korean gangster gets what he wants but only for milli-second. After he dropped Kuntz with that vicious left hand, he visually hesitates for a split second before jumping on his opponent to finish the fight. That slight hesitation allows Kuntz to scramble for a single leg takedown and Bang drops for guillotine that looks incredibly tight and works to satisfy the UFC official in his ear for the time being.

This guillotine, however, has suspicious qualities. His back is pretty flat on the mat and most experienced fighters know that you need to have a slight angle with your hips to really get the best out of this choke. That doesn’t mean he did it on purpose, it could just be a technical flaw he exhibits all the time. In this case, it is worth noting that despite consistently going for that submission he’s never won a fight with it (or by any submission) in all 28 of his professional fights.

Instead, what is more exciting to speculate about is how dramatic the submission (and the hammer fists that led up to it) seems to be for such a calm Korean guy. This is a guy that rarely shows emotion and he is grimacing and wincing and squeezing as hard as he can. This is also a guy that has been known for his brute strength (as noted by Joe Rogan when Bang rolled Taisumov in their fight). The camera angle on the choke is in perfect view to see Bang’s forearm clearly under the chin of Kuntz and very deeply choking him.

I’ve personally been submitted by not-so-perfect guillotines just because they were under my chin and my opponent had a strong squeeze. Perhaps that’s why I haven’t made my own UFC debut, but that choke looks like it should end the fight. Especially because of how hard Bang, who is known for his brute strength, is apparently squeezing. My speculation on this is that Bang might be “hamming” it up for the UFC officials to give himself the argument that he actually did try and finish the fight. I believe that he wasn’t squeezing as hard as he appears to be. That might be a reach but let’s continue on this path of intrigue.

After Bang gets back up to his feet from his dramatic guillotine attempt, it appears he has gassed himself out from the submission. He has been known in his fights to get tired and just throw heavy hooks and overhands so this is not anything new, what seems unusual about it is how early it’s happening. This early fatigue could be a sign of the lack of preparation and training that he may have had as a result of accepting the bribe to throw the fight. Why train when you’re going to throw the fight anyhow? The lack of training coupled with the recklessness he started the fight with could possibly demonstrate an overall lack of desire to win by a person with the same bias as me.

At this point in the fight it seems that the UFC official is winning the argument with the Korean gangster in influencing Tae Hyun Bang’s decisions to fight to win. For the rest of the first-round, Bang is throwing heavy hooks and overhands looking to clip Kuntz for an early stoppage, all of which seems as real as it gets.

My speculations in this piece only include what I saw in the first-round to invite you to watch the whole fight and find more moments where you can see the inner struggle of Tae Hyun Bang. Or, find evidence in the opposite direction (of which there could be a lot as well) to prove me wrong. I speculate to spur discussion and work to put controversial ideas out there for the pure sake of engaging in thoughtful dialogue and debate. What you read here was an interpretation of a fight that I saw and the explanation of what I saw below the surface.

Now that we know what happened in the lead up to the fight, speculating on how it affected the fight itself can never be confirmed. I want to remind everyone reading this that I’m not attempting to present these theories as fact, but rather to share my own insight into a complex situation that depicts a true inner struggle taking place within the mind, heart and soul of a respected fighter. If were were all honest with ourselves, every fighter has faced moments where their conscience was in crises, when our desire to win conflicts with our sportsmanship and standards. Bang has the unfortunate consequence of having his struggle shown under the public spotlight of judgement.