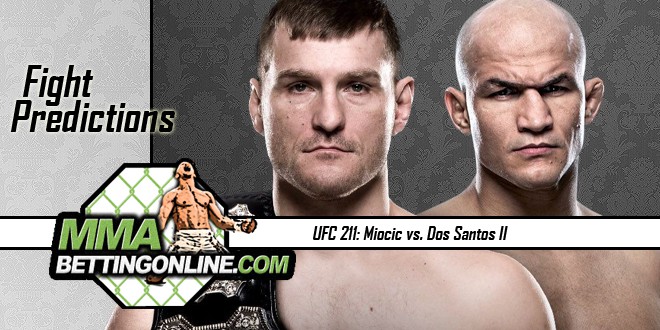 There are some intense fights coming up this weekend, and so here is my take on three of the top fights.  I’ve also listed the current fight odds as of this writing – but keep in mind they can change between now and fight time – so be sure to check the MMA betting lines and odds for updated data in real time. Also – I’d love to get some conversations going here – feel free to give us your take on the upcoming fights in the comments section at the bottom of this article.

This particular rematch is interesting because the fighter who lost the first fight is now the champion. Certainly Junior Dos Santos will come into this fight with an extra bit of confidence knowing that he has already defeated Stipe Miocic before. These two men are predominantly boxers inside the cage throwing little to no kicks and really only using takedown attempts as a means to set up their striking for later in the fight. Their first fight was an MMA boxing match that occasionally had a slightest bit of grappling before one or the other scrambled out and got back to their feet. A great boxing match it was though. Both fighters hurting the other in various points in a fight that as extremely difficult for anyone to score.

Most of the MMA community would give the boxing advantage to Dos Santos, but it’s a slight one. Dos Santos seems to use more set ups and to strike with a bit more fluidity than Miocic. Having said that, he also tends to slow down his work rate when takedown attempts start flying at him. I wouldn’t be surprised to see Miocic use a more takedown heavy game plan against him this time around. Whether or not he actually gets the takedowns is anyone’s guess and that’s not even the most important part, it’s just that he shoots them and keeps Dos Santos’s mind occupied with defending them while he uses his striking to win the overall fight. My prediction is that another closely contested win will go to Stipe Miocic via decision.

Joanna Jedrzejczyk vs. #3 Jessica Andrade – Strawweight Championship Of The World

Joanna has made an MMA career out of avoiding the takedown and using her striking to overwhelm and eventually break down her opponents. Both of these ladies use their striking as their main weapons when they fight but they use them in vastly different ways. Andrade is a berserker with her striking, when she sees her opening her main reaction is to furiously let it all out until there is nothing left. She sprints forward with vicious hooks and uppercuts and simply throws everything into every shot. A truly dangerous and scary striker. She can also use that vicious sprint forward into a takedown attempt to continue the beating in top position, a tactic she often uses.

While Andrade has a wider variety of skills to use in the cage, Joanna has developed her skills to a significantly higher degree. Andrade typically throws the same punches repetitiously when she is battering her combos onto her opponents. She has less variety in the specific discipline of striking, while having more variety in the larger picture of MMA with her highly-developed guillotine and takedown game. Joanna, on the other hand, has more developed her striking skills to the point of mastery in almost every aspect. She can use her striking to control very nuanced portions of the fight and has many weapons in her flurries. Where Andrade will really only throw power hooks and uppercuts in flurry, Joanna has the ability to gauge and calculate in milliseconds the proper shot she needs to throw. She finds herself composed in the midst of chaos and usually requires less strikes to do more damage than the berserker method of Andrade.

Joanna has focused the vast majority of her grappling efforts into takedown defense. A smart move for such a skilled striker. Andrade likes to pick her opponents up and slam them, a type of takedown offense that has yet to be seen against Joanna. The major question here will be if she can stop the takedown that would rather see her go up into the air first rather than straight down to the ground like she has been faced with in the past. I think Joanna’s mind for fighting, highly specialized striking and takedown defense will be too much for Andrade. If the fight goes past the second round, Andrade will get tired in her attempts and be finished in the Third. My prediction is that Joanna Jedrzejczyk wins by TKO via strikes in the third round.

Demian Maia has some of the most dangerous Brazilian Jiu Jitsu in the world. He’s been fighting in the UFC since 2007 and had most of early fights in the Middleweight division. Jorge Masvidal has been competing in the UFC since 2013 but he has been competing against the best fighters in the world for almost as long competing in Bellator way back in 2009. The two main factors in this fight are going to be size and Maia’s takedown ability. Masvidal is coming up from lightweight and Demian Maia has come down from Middleweight. Maia is sure to be bigger and stronger opponent which could be a huge factor in this fight.

Jorge Masvidal has the clear advantage on the feet. While Maia has great punches, he is no boxer compared to Masvidal. On the ground, that dynamic is exactly the opposite. Masvidal has a good grappling arsenal as his disposal but if you watch his fights he really only uses it to set up ground and pound or to get back up to his feet. Simply enough, if Maia is able to secure the takedown and keep Masvidal on the ground this could turn out to be a short night for up and coming Welterweight contender, Masvidal, as he is likely to be submitted. On the other end of things, if Masvidal can stop the takedown of the bigger and stronger Maia, a skill we all know he has, he will undoubtedly pick Demian Maia apart with his clean and precise boxing technique while dancing around him. I think Masvidal will be able to stop the takedown so my prediction is a first-round stoppage via strikes by Jorge Masvidal.