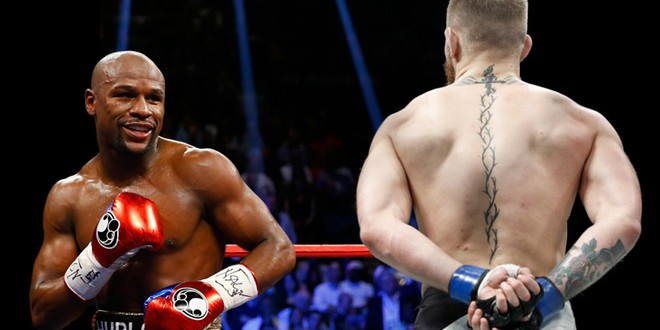 This will be the biggest fight in combat sports history and the most dramatic and exciting thing to happen in the sport of boxing since Muhammad Ali was still active. The debate between MMA and Boxing has been raging on since the UFC gained mainstream media attention well over a decade ago. All of those who are educated in both sports relate the same message: boxers dominate boxing and mixed martial artists dominate mixed martial arts. This is a truth that seems obvious despite the fact that boxers have been discounting the boxing skill and technique of MMA fighters openly since that debate began.

To date, there have been a few high level professional boxers who seem to be delusional that have crossed over into MMA saying things like “my footwork will keep me from getting taken down, I don’t need to train in grappling.” The first real example was James Toney. For those who don’t know, James Toney is one of the best boxers in the history of the sport and has held 13 titles over 5 different weight classes. Only a delusional MMA fighter would say James Toney isn’t a dangerous match up inside the cage.

However, a perfectly right-minded MMA fighter would also say James Toney is probably an easy fight because of his lack of training in grappling. Even a novice grappler can easily control and submit a person who has never grappled. James Toney didn’t fight a novice grappler, he fought an MMA legend, Randy Couture. The fight went exactly how most people thought it would, randy shot in and took the dangerous boxer down immediately. He then punched him a few times and submitted him early in the first round. It was barely even a fight.

The crossover of boxers into MMA is problematic because although they have such a highly specialized skill set, they lack the other skills required and that makes them easy to defeat under those rules. The crossover to boxing from MMA is less problematic because at least the MMA fighter knows how to box, even if it’s nowhere near the level of the boxer. It might still make them an easy target, but the MMA fighter has, at least, boxed in competition before.

Here are the details of the fight according to Dana White. The fight will take place on August 26th at the T-Mobile arena in Las Vegas. It will be a 12-round boxing match contested at 154lbs wearing 10 ounce gloves. Dana White hinted at a clause in the contract that would result in Conor McGregor losing an extraordinary amount of money should he get desperate and try any MMA techniques while in the boxing ring. Mayweather promotions is building the undercard and it will be a full-fledged boxing event.  Licensed sportsbooks are already circulating odds for the historical Mayweather VS McGregor fight, with the oddsmakers favoring Mayweather for the win. Odds of this writing are:

Although it is extremely unlikely that an MMA fighter who has never competed in professional boxing will win a fight against one of boxing’s all-time greats, lets entertain the thought. Firstly, Mayweather has been known to have a particular disadvantage to southpaws. McGregor is not only a southpaw, but the largest and most powerful southpaw that Mayweather has ever faced. McGregor is notably larger than Mayweather, someone who has fought at 170lbs twice in his career versus Mayweather who started his boxing career competing in golden gloves tournaments at 106 pounds. McGregor has also made a career out of proving people wrong and doing things that no one has ever done before. He has a left hand of death in the eyes of most educated sports commentators and could very well shake up the world by knocking out Floyd Mayweather. This will be the first time a full fledge MMA fighter has made the transition over to boxing and it’s with the highest possible stakes.