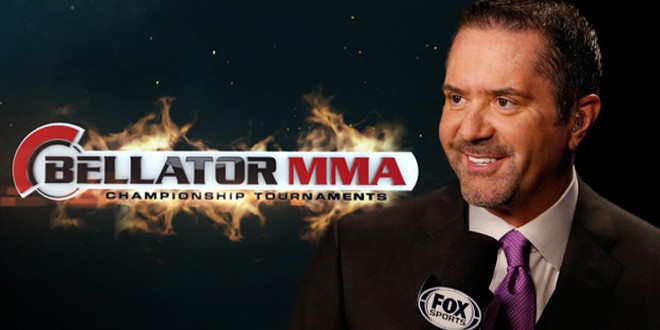 Since the Reebok deal more than just a few fighters from the UFC have made the switch to the more lucrative sponsorship opportunities that Bellator can provide. Now, since the UFC is under new leadership, it seems like they have also lost one of their commentators. Well, the word “lost” is a bit misleading. Mike Goldberg was fired from the promotion after over 20 years of service to the UFC without any notice or tribute from the company that he had worked for so long. They didn’t even give him a reason why they were letting him go. “I’m not going to sit here and weep because new ownership came in and I was one of the guys who got cut.” Goldberg continued, “I was one of a lot of people, and a lot of good people, from the Zuffa era who got cut. And so, I felt for my co-workers, for my friends, as much as I felt for myself.”

According to that interview which was posted on mmafighting.com, Goldberg talked about how the new ownership came in and put entire teams out of the job. Over a hundred people were fired and during all the layoffs Mike didn’t feel the need to set himself apart from anyone else. “I’m not the only guy who was let go by the new ownership. Well over 100 people [were let go],” Goldberg then explained, “I’m the one being talked about because I had the high-profile job.”

Mike Goldberg was working for the UFC before Zuffa came around with Dana White and bought the organization for 2 million dollars. Over 20 years later the UFC sold for 4 billion and has started down a path with the new leadership that has already amounted to some pretty negative effects for the company’s image in the public eye. Despite the promotional deficiencies that have been placed on the women’s bantamweight champion of the world, Amanda Nunes, the organization has also failed to promote the men’s flyweight division and has been embroiled in a heated public argument that’s centered around the chronic mistreatment of fighters. Something that has been brought to the attention of the media so many times that it seems hard not to believe.

At the end of the day, Bellator succeeds in acquiring one of the most experienced and dedicated ring commentators in MMA history as the expense of the newly mismanaged UFC. As situations that surround UFC employees (and fighters) being mistreated in such big ways it starts to conjure up some questions about the sustainability of the brands new business model. The pinnacle of skill in the sport in terms of athletes is slowly moving more towards Bellator and has been for quite some time now. Now that they are also attracting a lot of the UFCs former employees on the back end as well, I wonder if this is yet another foreshadowing of a shift in MMA’s most popular promotion to come in the relatively near future.