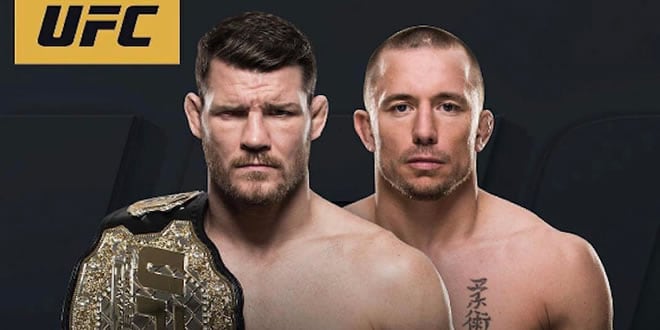 It’s been over three years since Georges St. Pierre vacated the Welterweight World Title after successfully defending it against Johny Hendricks at UFC 167 in 2013. It was his 21st fight in the UFC and his 12th consecutive win. He was unbeatable and he ended his career on top, a rarity for most fighters. But that wasn’t the end was it?

The most dominant welterweight in the history of the UFC is making his return to the cage to fight Michael Bisping in another championship bout.  This time the fight is in the Middleweight division at 185lbs, a fact that Bisping seemed quite confident in at the press conference that took place on Friday. “Stand up, stand up and look at the size of me and look at the size of you,” said the Middleweight World Champion. GSP seems confident nonetheless. MMA odds are already surfacing at the premiere MMA betting sites listing GSP as the favorite.

Michael “The Count” Bisping won The Ultimate Season 3 Light Heavyweight tournament when he was still competing in the heavier weight class. Despite being told he was too little for the class, he had another 5 fights at light heavyweight before making the permanent move to the 185lbs.  GSP was a welterweight for his entire career. He was always professionally consistent with making weight and keeping his body fat to the optimum percentage. He never seemed to have an issue making the 170-pound weight limit of the class that he dominated for so long. Which leaves a giant question mark around the size advantage that Michael Bisping will have coming into this inter-dimensional matchup.

It also appears that GSP didn’t let himself go in his retirement. It’s at least obvious to his Instagram followers. Without a visible size increase in his musculature, it makes that question mark even bigger and leaves us all wondering what tricks the former champion has up his sleeve to mitigate the size difference.

One thing we can count on is that GSP definitely has some tricks up his sleeve. He has been consistently hailed as having one of the highest fight IQs in the business. Georges has taken a lot of criticism for his conservative approach to winning fights in the past because of his high-level wrestling pedigree and ability to hold fighters down when they have advantages on their feet. Well, when the smarter fighter figures out they have an advantage somewhere, they tend to take the fight there as often as possible. It should be no secret that GSP will at some point take this fight to the ground.

But, its misleading to paint the picture that GSP is just a wrestler. GSP is probably the most well rounded fighter in the history of the UFC and that is in large part why he was so dominant as champion. GSP has world class skills in ever discipline of MMA but what he’s best at isn’t any one of them in particular. It’s the skill of mixing them together. His entire career is basically a highlight reel of perfectly timed takedowns mixed with strikes in such an unpredictable fashion that his opponents appear as if they are stuck in the mud watching. Right when they expect GSP to change levels and try to take them down they get head kicked or superman punched. When they move forward to throw their punches and expect GSP to be there to defend, suddenly the French Canadian vanishes into thin air and appears again rapidly underneath them and then next on top of them in dominant position.