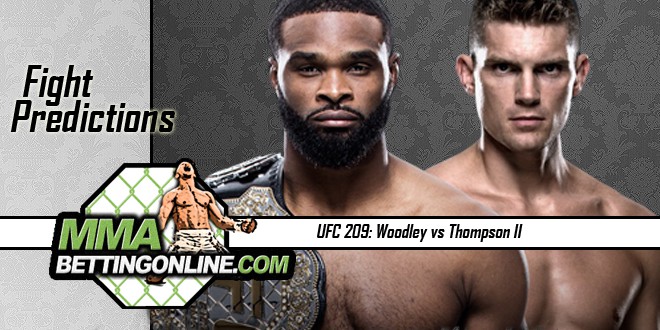 Despite the loss of the highly-anticipated “Interim” Lightweight World Championship matchup between Tony Ferguson and Khabib Nurmagomedov, UFC 209 still has me pumped for a number of reasons, and not only because of how the UFC betting odds are lining up. Firstly, the rematch between Tyron Woodley and Stephen Thompson is going to say a lot about both of these fighters and their abilities to adapt their strategies in the wake of their first bout. Secondly, two of the most dangerous strikers in the history of MMA are fighting each other. Mark Hunt vs Alistair Overeem is probably the most anticipated match-up on the card for me personally. Suga Rashad Evans is coming back off of two losses to face former Olympian Dan Kelly and Groovy Lando Vannata will be throwing leather with Swedish kickboxer David Teymur.

Lando Vannata is one of the most interesting fighters on the card for me. He had an extremely impressive performance against former co-main eventer Tony Ferguson in his UFC debut, a fight he took on just two weeks notice. In that fight he almost finished Tony Ferguson on multiple occasions and had him in serious trouble for a good bit of that fight. His boundless movement style is hard to predict and unorthodox for textbook fighters, a really fun fighter to watch.

His opponent, David Teymur is a Swedish kickboxer that had over 50 professional kickboxing fights in the international circuit. With a more traditional style, Teymur relies heavily in his southpaw stance on his powerful left kick and left straight punch. In his early professional MMA fights, he displayed a weakness in his ground game. Knowing that Vannata starting grappling and wrestling when he was 13 I’m wondering if he will take the safer more conservative approach and attempt to dominate the Swedish striker on the ground.

However curious about that grappling between these guys that I am, I think Lando is going to out strike the traditional kickboxer, Teymur. I think his unorthodox striking style is suited perfectly to eat guys like Teymur for breakfast. I got Groovy Lando Vannata by KO/TKO vis strikes in the first round.

Our Pick: Lando Vannata By KO/TKO Via Strikes In The First Round.

Dan Kelly has never fought a guy with the resume that Suga Rashad has. Rashad Evans is former UFC Light Heavyweight World Champion and The Ultimate Fighter season 2 tournament champion. He’s has over 10 years of UFC experience and has knocked out guys like Chuck Liddell, Forrest Griffin, and Tito Ortiz. He was a high level wrestler in college and throughout the course of his UFC career has used that high level wrestling to great effect. Lately, however he has chosen to stand a little more than earlier in his career and it may not be the best idea coming off a terrible KO loss to Glover Teixeira in April of last year.

Dan Kelly has fought in the UFC six times and has been eyeing a chance to get in there with a guy who is ranked in the top 15. Although Rashad is currently unranked his name in the sport is enough to be that fight that Kelly has been looking for. Dan Kelly has been to the Olympics four times and has competed internationally in Judo for years. He has been praised for having outstanding heart and the ability to persevere through great obstacles in the cage. This will be only the second time Dan has fought in the USA and the first for the bright lights of Vegas.

Dan Kelly is a bit too slow for Rashad the way that I see it. Even an aging Rashad will be able to take him down. Although Rashad seems too willing to stand and throw shots in last few fights, I think he even beats the Australian Judoka on the feet if the fight stays there and I don’t think it will. First round stoppage victory for Suga Rashad Evans via ground and pound.

Our Pick:  Rashad Evans Via Ground and Pound

Bummer.  Read about this fight’s demise here: The Khabib Fight Is Off

A fight that could easily headline its own Pay-Per-View, I personally cannot can’t keep it together when I think about this fight. Mark hunt has been billed as the king of the walk away knockout. What that means is that he has, on multiple occasions, knocked his opponents out on their feet and possessed the awareness to know it so confidently that instead of following up and throwing more strikes to make sure they are knocked out, he simply walks away and lets them drop. He typically walks forward with a granite chin and taunts you to take a shot at him while he waits to counter with huge upper cuts and hooks that could probably knock out an elephant. He was a decorated kickboxer from the old days of K-1 and was multiple time World Tournament Champion against some of the same guys that Overeem fought as well.

Alistair Overeem is one of the most dangerous humans on the planet. He has a strong Dutch kickboxing background and is the only fighter in the history of combat sports to simultaneously hold a world title in both Kickboxing and MMA. He was the K-1 2010 World Grand Prix Champion, the Strikeforce Heavyweight Champion and a 2005 PRIDE Middleweight Grand Prix Semifinalist. He is as technical a striker as can that huge body allow. He prefers huge knees and kicks to the body and looks to grab a Muay Thai clinch where he will finish you off with knees. With everyone in fear of his striking people tend to look past his grappling which is also on a world class level with 19 of wins coming by way of submission.

Mark Hunt has been very vocal lately about all his opponents doing steroids and I think that may be a sign that he might not be all there mentally. He can’t seem to stop complaining in interviews about how the UFC is forcing him to take fights with cheaters. Overeem has always battled speculation of performance enhancing drugs so this comes as no surprise.

Our Pick: Mark Hunt By Walk Away KO In The First Round

Tyron Woodley was an NCAA Division I wrestler at the University of Missouri. So, you can imagine my surprise when he didn’t take the world champion kick boxer down after the first round of their fight. It seems like an obvious game plan and according to Joe Rogan, Woodley himself doesn’t even know why he didn’t wrestle more in their first bout. Tyron trains with MMA mastermind Duke Rufus at RufusSport and along side Ben Askren who is probably the best grappler in the world. He has a brown belt in BJJ from Ricardo Liborio and holds 6 submission victories inside the octagon. He is one of the most explosive guys in the division and it seems obvious that his basic philosophy on striking is damage over volume.

Wonderboy was 38-0 as an amateur kick boxer with 18 knockouts and multiple tournament championships. I actually had the pleasure of watching him compete live when he was an amateur at the IKF World Classic tournament in Orlando. He destroyed his opponent with a flurry of spinning sidekicks back in the days when no one believed in sport karate as a viable striking art in Mixed Martial Arts. He then turned pro and went 20-0 with 10 knockouts before making the full time switch to MMA. He has a purple belt under Carlos Machado who also happens to be his brother in law and his takedown defense looks better in every fight.

I actually scored the first fight a draw personally, but the person I would rather be after the fight was Tyron Woodley. I think he did more overall damage to Stephen Thompson in just those short moments of the fight when he had him hurt then what Wonderboy was able to accumulate on him over the course of the rest of the fight. So although I did agree with the first decision, my heart says Tyron was the more dangerous fighter and thus the winner. I’m taking Tyron Woodley via KO/TKO by strikes after wearing out Wonderboy over the course of a few rounds. I’m not betting on this one though, Stephen Thompson may land one of those spinning kicks and end the night early its too hard to tell.

Our Pick:  Tyrone Woodley Via KO/TKO By Strikes