The Khabib Fight Is Off 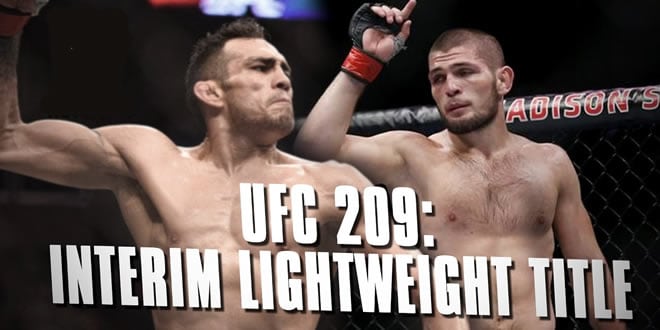 From what looks like another disaster with weight cutting, the interim lightweight championship fight between Tony Ferguson and Khabib Nurmagomedov has been canceled. The fight was originally slated to be the co-main event of UFC 209 taking place this weekend at the T-Mobile Arena in the Las Vegas metropolitan area. Currently the fight has been completely canceled with no replacement found for Tony Ferguson.

Khabib “The Eagle” Nurmagomedov was taken to Sunrise Hospital & Medical Center on Thursday night following weight cut related issues. According to the people surrounding the incident Khabib was treated at the hospital and then released. The UFC didn’t issue the official statement until after the morning weigh ins where they stated that the entire fight was scrapped because Nurmagomedov wasn’t medically cleared by doctors.

The UFC released this statement:

“UFC lightweight Khabib Nurmagomedov was transported to Sunrise Hospital & Medical Center Thursday evening due to weight management medical issues. He was treated and has been discharged, UFC officials confirmed.

The scheduled interim lightweight championship bout between Nurmagomedov and Tony Ferguson at UFC 209 has been cancelled on the doctor’s recommendation.

UFC 209 emanates from T-Mobile Arena in Las Vegas, NV. Saturday night live on Pay-Per-View at 10pm/7pm ETPT. Tyron Woodley takes on Stephen Thompson with his welterweight championship on the line in a rematch from their 2016 Fight of the Year contender at UFC 205.”

This isn’t the first-time calamity has circulated the fight between El Cucuy and The Eagle. They were matched up to face one another at the TUF 22 Finale that took place in December 2015. Khabib dropped the fight due to a rib injury. Then, they were again matched for April of 2016 at the UFC on FOX 19 and Ferguson was forced out of the match citing issues with his lungs.

Ferguson has been on a rampage lately winning his last 9 consecutive fights with 6 stoppages. In his climb up to the top of the ranks he accrued 7 fight night bonuses, two of which he got in his fight with top contender Edson Barbosa. Khabib Nurmagomedov is known by few as the ‘uncrowned king’ of the lightweight division. His combat sambo background has provided him with the tools to remain undefeated in mixed martial arts with a record of 24-0.

It also should be noted that Tony Ferguson made weight at roughly 9:30 this morning without any reported issue at 154.5 lbs. This isn’t the first-time weight has been an issue for Khabib. He missed weight against Abel Trujillo way back in 2013. They have not made a final decision on which card will move up from the prelims to the main card.  Looks like the prominent MMA Betting Sites that were covering this fight will have to take down their lines and odds for this fight.