Maymac Update: Gloves Contested Will Now Be 2oz Closer To The Size Of The UFC Gloves 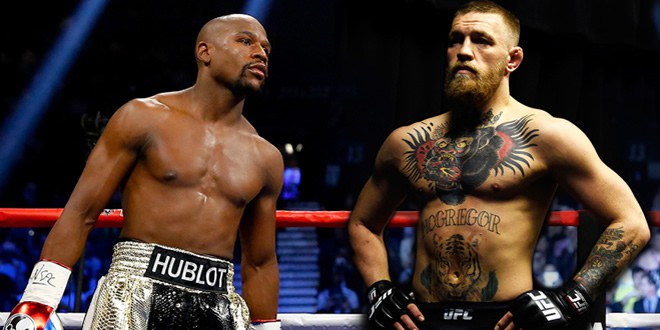 There has been an exciting change to the boxing mega fight of the year between Floyd Mayweather and Conor McGregor and it doesn’t favor Floyd. Against the advice of the Association of Ringside Physicians (ARP), the bout will take place using smaller gloves than is normally used in the weight class in which they are competing. The two will square off on August 26th wearing 8 oz. gloves instead of the originally agree upon 10 oz. This is bound to affect the MMA betting odds for the historical event.

The change isn’t anything that is suspected to waver Conor’s ambitions as the Irishmen is used to competing in the UFC where the gloves are half that size, at only 4oz. Floyd, on the other hand, has made a career out of vying for larger gloves in his matches because he has been known to chronically break his hands in fights. A commonality of most older boxers that have competed at the high level for most of their careers.

The change is thought to only favor Conor, as most analysts would agree that Conor’s largest opportunity to win in a fight like this would be by knockout early in the fight. With smaller sized gloves, that seems to be more possible than it was before, but can 2 oz really make any real difference in the punches thrown on that night?

NSAC doesn’t seem to believe so, the vote went through as a one-time approval in one of NSAC’s regularly schedule meetings where NSAC determined that the slightly lighter gloves with less padding posed no significantly larger threat to either boxer than that of the 10oz gloves. It was on this basis that the lighter gloves were voted for and passed in the meeting.

Despite slightly favoring the smaller gloves for McGregor, this came as a request from the Mayweather camp. The camp sent in the request as a result of McGregor’s claims that Mayweather refused it in the earlier negotiations. Mayweather apparently responded by taking the bet and petitioning for the lighter gloves himself. Could this mean that McGregor is in ‘Money’ Mayweather’s head? Will the betting sites covering MMA fights take this unspoken challenge negotiation into account when creating the betting lines?

On the issue of the lighter gloves in the 154lb weight class, NSAC granted the waiver but have been reputedly unhappy about how the deal took place. “I do not like the Nevada State Athletic Commission being used as a pawn in a social media bout,” one NSAC official said. “Between these two, that part of this request pisses me off. He then continued, “this body is not the subject of two fighters … to create social media stir and other controversy to sell tickets and to sell DirecTV.” The bout will likely fuel some intriguing prop bets for those who enjoy betting on MMA fights.

One thought on “Maymac Update: Gloves Contested Will Now Be 2oz Closer To The Size Of The UFC Gloves”