What The MayMac Hype Train Has Done 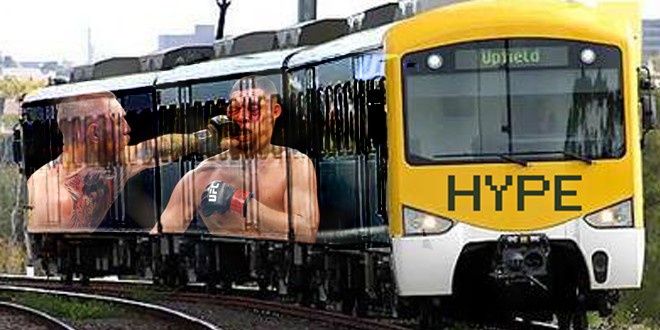 Before the hype train got kicked off, it seemed pretty obvious what true combat sports enthusiasts thought about this fight. They had a simple view, mine included. Conor has never had a professional boxing fight and now, all of a sudden, he’s going to fight the best pound for pound boxer in the world and arguably the best defensive boxer of all time? In a boxing match? It seems like an easy bet. Of course, Mayweather is going to outbox him, if we compare their records with amateur fights included, Floyd Mayweather literally has over 100 fights more than Conor and they are all specifically in boxing. The odds seem overwhelming. In fact, you can monitor the odds at MMA betting sites because they all cover boxing events.

This is where we sit back and marvel at what the hype train has been able to accomplish. Since this fight was announced the public has been utterly inundated with the strengths of Conor and the weaknesses of Mayweather. They have done a spectacular job in selling this fight and they have done so by primarily selling the fact that Conor McGregor can actually win this thing. Which is true, in striking sports like boxing there is always the puncher’s chance. I’m a pro Muay Thai fighter, I like to think I have good hands but I know that they are nowhere near that of Floyd Mayweather’s. Still, if you put me in the ring with Floyd, I’m 100% positive that I will hit him at least once before he breaks his hand on my head and sends me to the canvas. That’s the way striking is, everyone’s got a puncher’s chance.

But that’s not how they have presented Conor in this one. They have consistently claimed Conor has more than a puncher’s chance and you know what, they might be right. Let’s look at the facts that have been repeated throughout this media frenzy.

Firstly, Conor McGregor is a bigger man. A much bigger man. When you see the two fighters standing side by side in the press conferences, you can see in the size of their faces. McGregor’s face is visibly much bigger than Floyd’s. He also regularly fights at a higher weight class than Floyd has competed at throughout the bulk of his career. Conor has competed as high as 170lbs. The highest weight that Floyd has competed at is the weight of this fight, 154lbs. Despite the seemingly drastic size difference, Conor only sports a 2-inch reach advantage over Mayweather. 2 inches may not seem like enough to boast but this hype train has exaggerated that 2 inches to the extent that people are using it has evidence in their picks and have even allowed it to influence their wagers at sportsbooks offering online MMA betting options as well as online boxing lines.

Age is another big factor that has been talked about and it plays into one of the main disadvantages that the hype train has highlighted about Floyd Mayweather. Conor has recently turned 29 while Floyd is 40 years old. Throughout Floyd’s 21-year boxing career he has broken his hands numerous times. Miguel Diaz is a veteran cut man in premier boxing organizations and has been in the fight game for so long he has taped the hands of multiple generations of Mayweathers. “They didn’t have enough calcium as babies. Their bones did not grow strong,” said, Diaz. “They all have the same hands, and the same problems.”  Age and bone density undoubtedly play a role in the odds for this fight.

The next thing is that Conor is a southpaw. People say Floyd has always had trouble with southpaws. This is one that gets me a little frustrated. While it’s true, Floyd has displayed a little difficulty in his matches against southpaws, what people are really talking about is Floyd’s problem one southpaw in particular, Zab Judah. Zab is one of the only fighters to ever actually hurt Floyd in the ring and while he never officially dropped him and went on to later lose the fight, he did put Floyd in serious danger as they fought.

Skeptics noted that it was because of Zab Judah’s southpaw stance that threw off Mayweather but I think it was more about timing and accuracy. Mayweather has been rocked by orthodox fighters in much of the same way too. Shane Mosley almost knocked him out and had Floyd stumbling to the point where he was holding on for dear life. People weren’t saying Floyd has trouble with orthodox fighters after that because that would be ludicrous. While it’s probably true that Mayweather prefers an orthodox fighter as his opponent, I doubt the stance is going to be enough to sway the odds into McGregor’s favor technically.

Personally, I think it’s McGregor’s confidence that will do that. This is the first time that we have really had the chance to see Mayweather get confronted with the same type of media brashness that he has used in the past. Frankly, I don’t think he knows how to deal with it. He has made a career out of getting into his opponent’s heads in the same way that Conor does in MMA but it’s starting to look like Conor is just plain better at it. I think Conor has already entered into the head of Mayweather and this weekend we’ll get a unique look into how that will impact the veteran boxer.

I’ll give the closest thing to a pick that I can possibly muster. If Conor wins this fight, which is a longshot, I think he will do it as he says, by KO within four rounds. The more likely outcome will be a Mayweather decision win, which is still a win for the sport of MMA, mind you. What I would really like to see happen? Conor by knockout in round 2. That would top my year off properly.