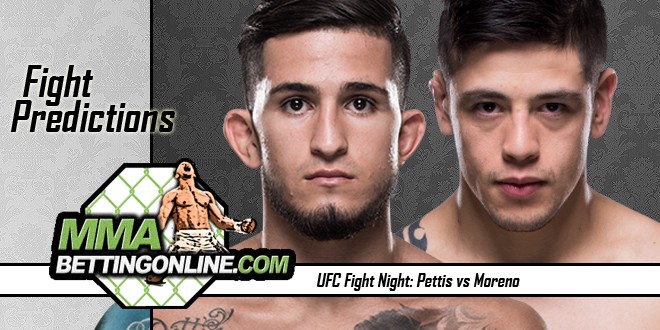 UFC Fight Night: Pettis vs Moreno is the UFC’s first event to take place in Mexico. It will be on August 5th at Arena Ciudad de Mexico in Mexico City. The main event is a flyweight bout between Sergio Pettis and Brandon Moreno. Pettis is the little brother of former world champion Anthony Pettis and Moreno was a contestant on The Ultimate Fighter: Tournament of Champions. The co-main event is a women’s strawweight matchup between Tristar Gym’s Randa Markos and Alexa Grasso who recently was handed her first loss from Felice Herrig. Then, a welterweight matchup between exciting striker, Alan Jouban and American Top Team’s Niko Price.

Sergio Pettis probably has the better striking and Moreno probably has the better grappling. Those are some real serious generalities and may not even be true but that should communicate how each of these fighters prefer to compete. They both use their stand up as a solid strategy for dealing damage but Pettis has shown to be more nuanced and demonstrates a subtle understanding of striking. He fights with crisp angles while he changes his stance and finds the little moments to throw multiple quick and precise shots that seem to land inside the combos of his opponents. It seems like he’s choosing the smarter moments to throw and his quickness allows him to fit 3 punches in where normally fighters only find 1 or 2. He has a dynamic kicking game that he sometimes forgets about while he fights and he has shown to have some good takedown and ground fighting abilities but rarely favors them as he fights.

Brandon Moreno has a slightly slower but more destructive style of striking. Where Pettis seems to be a speed and quickness fighter with his boxing, Moreno seems to be more a slugger. He may not hit you with as many but when he hits you it will hurt more. His philosophy on fighting appears to be pretty dynamic as he clearly likes to stand up and box with opponents to hurt them standing and then to finish them with a submission on the ground rather than ground and pound like most people. He has 20 submission wins and currentlly holds a purple belt in BJJ despite finishing a brown belt in Dustin Ortiz via submission. I like Moreno’s style but for this fight I think Pettis will be the sharper and more elusive fighter. I have Pettis to win this one by decision.  At the time of this writing, the betting odds for this fight have Moreno as the favorite, so I’m in opposition with the oddsmakers.

One thing that is always impossible to judge in a fighter is how they will handle a loss. Especially when it’s a fighters first loss. Sometimes you see fighters who go undefeated for a long period of time take their first loss and totally fall apart. While for others, it seems to motivate them even more. Alexa Grasso has just experienced the first loss of her MMA career to the veteran Felice Herrig in her last fight. With this upcoming fight that she has with Alexa Markos, we get the rare chance to see exactly how it impacted her to finally take a loss in the UFC.

Grasso tends to be a striker in her fights. She has a really nice right body kick and she uses her jab to set up a lot of her tricks. She might lunge in with a big right hand or roll her head in, something like what Tyson used to do, to throw a big lead hook. She was taken down multiple times against Felice Herrig but that doesn’t mean Randa will be able to do the same. She was also very skilled at bumping and moving Herrig off of her when she was taken down, which is impressive if you know who Felice Herrig is. She is very aggressive at times and if her coaches can get her to use that agression right away, it could be an early stoppage for Alexa Grassso.

Randa Markos also fought a long time UFC veteran in her last fight in Carla Esparza. Randa seems to be a more susceptible to fight in the clinch and shoot for takedowns than Grasso is. That is only based on their most recent fights so it could be a bit misleading because Randa had a visible lower stance for Esparza as compared to other fights where she’s fought. Despite that, she seems to have a wider range of strikes as well, landing clean spinning back fists and other spinning strikes on Carla Esparza. Randa also seems to be more willing to trade in a frantic wild way than Grasso. In exchanges Alexa Grasso’s habit was to cover up counter and move. Towards the end of the third round in the Esparza fight, Randa is walking in swinging, totally unafraid. That’s a powerful skill in the octagon. When I started writing this comparison I liked Grasso to win it but I’ve convinced myself that Randa Markos will win by decision.  Again, I’m at odds with the oddsmakers who have Grasso listed as the favorite.  Most of the popular sportsbooks have the odds pretty close to what we’ve got below.  The odds we list are most often provided by Bovada Sportsbook.

Alan Jouban is a very technical southpaw striker who uses exceptional rhythm and timing to land his strikes. He has brilliant coordination with his kicks and has won 9 of his 15 wins by KO. Niko Price is a bit more well-rounded, but doesn’t seem to have the fluidity with his striking that Jouban has. Price seems to have a wider variety of techniques while Jouban seems to have developed his individual techniques more at the expense of others. My extremely limited and superficial analysis of these two fighters comes to the idea that Niko will not be able to take Jouban down and doesn’t have the striking sophistication to survive on the feet either. So, I’ve got Jouban winning by TKO in round 2. I think Niko’s wild punching style when he gets desperate will ultimately keep him safe and dangerous until it whittles away in the later part of round 2. On this one, the oddsmakers and myself align with our predictions.