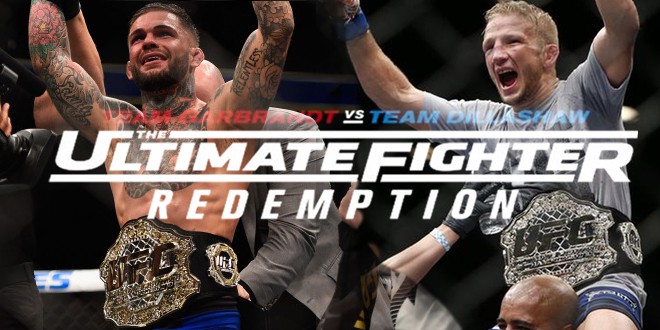 The latest season of the Ultimate Fighter was wrought with drama as former teammates, Cody Garbrandt and TJ Dillashaw, coached teams opposite of each other in what has become known as the most treacherous MMA tournament in the world. In seasons of the past, the coaches typically get ready to fight each other as the seasons culminate in the finale event. This time, however, Cody Garbrandt was forced to pull out of their fight in the finale due to a back injury that has recently plagued him. The Ultimate Fighter: Redemption Finale will come to us on Friday, July 7th in Las Vegas, Nevada with the main event match between Anthony Johnson and Justin Gaethje

The Ultimate Fighter: Redemption series contestants were all welterweight fighters that had been on the Ultimate Fighter in past seasons. Team Garbrandt consisted of Seth Baczynski, Mehdi Baghdad, Eddie Gordon, Hayder Hassan, Julian Lane, Justin Edwards, and Johny Nunez. Team “Killashaw” had James Jrause, Jesse Taylor, Ramsey Nijem, Dhiego Lima, Joe Stevenson, Tom Gallicchio and Gilbert Smith all competing for their chance to get back into the world’s most exclusive MMA organization.

The tournament progressed in the first episode where Gilbert Smith defeated Seth Baczynski in a unanimous decision and drama between the coaches started. Cody Garbrandt, at one point in the episode, grabbed TJ Dillashaw by the throat and shoved him further displaying the animosity between the coaches. The animosity continued throughout the season in various forms and highlights precisely how Team Alpha Male, TJ Dillashaw’s prior training grounds, feels about the fighter leaving their gym to train with their former head coach who left to start his own business, Duane Ludwig.

The drama started when Duane Ludwig was hired as the head coach of Team Alpha Male in Sacramento, California. It was there that he met TJ Dillashaw and started to form a rare bond between trainer and fighter that would lead TJ to a UFC world championship. When tensions started to mount at the Team Alpha Male camp, Duane Ludwig decided to leave and return home to Denver, Colorado and start a business there training fighters. When TJ decided to leave team Alpha Male to go with the coach that had led him to a world championship, most of the team Alpha Male members took offense. The ones that took the most offense were TAM team leader and UFC Hall of Famer, Urijah Faber, and TUF redemption coach, Cody Garbrandt.

The show has currently progressed into the semifinals where Dheigo lima won his chance at redemption via unanimous decision against Tom Gallicchio in a three-round war. We will get the chance to find out this Wednesday who Dheigo Lima will face between James Krause and Jesse Taylor in the finale next Friday on July 8th in Las Vegas.