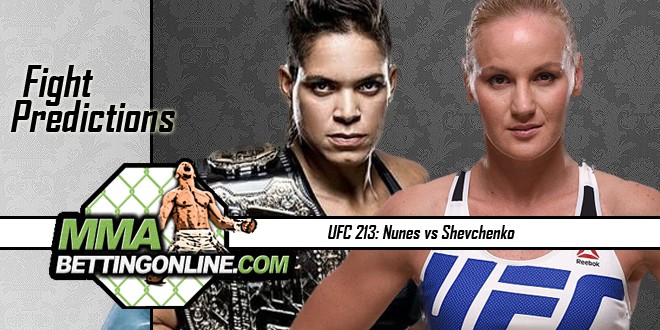 This is a UFC event that has gone through some changes but they managed to pull it together, taking place on July 8, 2017. First it was supposed to be a Men’s Bantamweight Championship fight between Cody Garbrandt and T.J. Dillashaw but Cody had to pull out because he injured his back. Then the potential fight of the century and probably the fight I was personally most excited for, Donald Cerrone vs Robbie Lawler, was scrapped because Donald Cerrone has a staph infection and a pulled groin. Despite the setbacks, the card turned out awesome. It will be the first time we get to see the Champion Amanda Nunes since she stopped Ronda Rousey and it’s against one of the highest-level strikers in the UFC. Here are my picks for UFC 213, along with the current betting odds for UFC 213.  As the fight draws closer, the odds may change. You can visit one of the legitimate sportsbooks that offer lines on UFC events.

First, the facts. Amanda Nunes is 5’8 with a 69 reach and a violent striker. She has a black belt in Brazilian Jiu Jitsu and a brown belt in Judo. She has 14 wins, and 10 by knockout with only 4 losses. She’s aggressive and she fights with the intention of hurting her opponent. Valentina Shevchenko is 5’5 with a 67-inch reach and a high level technical counter striker who has great kicks and awesome combinations. She isn’t traditionally belted in Brazilian Jiu Jitsu but she has a black belt in Judo. Her kickboxing record is astounding with 58 wins, 21 by knockout, with only 2 losses and 1 draw. Her MMA record is 14 wins with 2 losses and surprisingly enough, she has more submissions (6) that she does knockouts (4).

Shevchenko is more dangerous as the fight wears on. Valentina always plays it a little too safe for me and really doesn’t do much in the beginning of the fights unless her opponents are overly aggressive and fall into her traps. She excels at counter punching as her opponents chase her down. This isn’t to say that she can’t move forward, she closes the distance quickly and uses sharp and violent combinations to sustain damage on her opponents over the course of the entire fight. She wears people down with a barrage of strikes and counter attacks as they try to even the score. Her grappling is unbelievably underrated but that’s only because her striking pedigree is so high. With a black belt in Judo, Jiu Jitsu comes a bit more natural. She has more submissions in her professional MMA career than she does knockouts so that should give you some idea of her level of grappling. Having said that, I believe Nunes is still the better grappler and that’s probably a main component in her game plan.

Amanda Nunes is more dangerous per strike in my opinion. She’s a vicious striker that is very explosive and throws power into every shot. She has more of a chance to change the dynamic of the fight with one punch than Shevchenko, despite probably being the less technical striker of the two. I think she will stand with Shevchenko and try to damage her standing but will ultimately end up getting a takedown and doing most of her damage from the top position on the ground with strikes. There’s a really high likelihood that if this fight is on the ground in the later rounds for any longer than a minute or two, that Nunes will let her strikes lead her to a submission victory. Shevchenko knows how to get up to her feet though. She also knows how to disengage really well. In their last fight, she was able to get Amanda off of her a couple of times.

I think this fight is going to go the full five rounds with Amanda Nunes winning a unanimous decision victory. I really want to say it’s going to be a ground and pound stoppage in the second half of the fight, but I think Shevchenko is too good at scrambling to get all the way finished by Amanda. There’s also a chance that she has improved her clinch takedown defense from the first time these two fought and she won’t be taken down at all. If that’s the case, she may well win the unanimous herself. It really comes down to which fighter can spend the most time in dominant position. If the fight has a good portion on the ground, I’d say the likelihood that Nunes wins goes up dramatically.