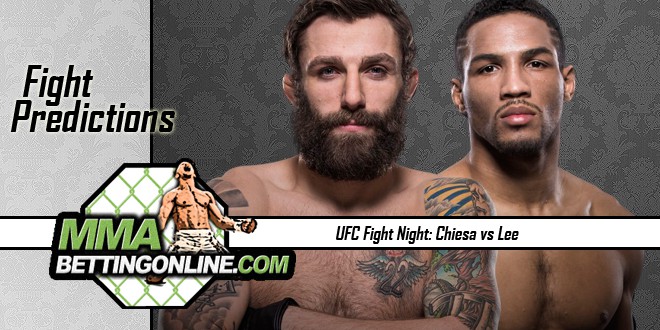 UFC Fight Night 112 goes down in Oklahoma City, Oklahoma this weekend at the Chesapeake Energy Arena. The main event has already become emotional with dramatic outbursts as the #12 ranked Kevin Lee spoke ill of the #7 ranked Michael Chiesa’s mother which caused a stir at the press conference. For the co-main event, we will see Johny Hendricks vs Tim Boetsch. At the end of the main card we will have the chance to witness one of MMA’s legends, former lightweight and former welterweight champion and MMA hall of famer, BJ Penn vs fellow veteran, Dennis Siver. If you intend to wager on any of these fights, there are licensed offshore sportsbooks that offer betting lines on UFC Fight Night 112.

In Brazilian Jiu Jitsu, sometimes fighters are a lot better than their belt rank would indicate. This happens because the only way to get belted in BJJ is through training in the gi (kimono). Most MMA fighters predominantly train in no-gi BJJ because an MMA fight is also no-gi. So, Michael Chiesa may only be officially a purple belt in the gi, but he is technically a lot better than that would indicate on the ground in his MMA fights when punches are being thrown. He has 10 wins via submission, 7 of which are rear-naked chokes which would indicate that he is a strong positional grappler that doesn’t like to give up dominant position. Standing up he has a long reach and uses his jab to set up kicks as he steps in and long straight punches. He’d good in the clinch but he’s better on the ground.

Kevin Lee will actually have the reach advantage in this fight although he’s the shorter fighter. He trains out of Xtreme Couture in Las, Vegas and predominantly uses his wrestling in offense rather than defense. He has a 17-2 record with 7 submissions and 7 decisions with one 1 KO. He seems comfortable on his feet and has good technique with this striking but he always falls back on trying to take guys down. In his fight with Leonardo Santos, a 7-time world BJJ champion, he exhibited some poise and control as he didn’t want to take the fight to the ground at all. Around mid-way through the round, however, he got cocky and started gloating which immediately got him taken down. He showed some good ground defense and survived on the ground with the world champion grappler only to get TKO’s later in the round after being rocked with a right straight that he didn’t see coming.

Michael Chiesa has become known for his conditioning and durability through hard fights and understands exactly how to put himself in the proper position to increase his likelihood of winning. He is consistently referred to as a smart fighter with an unlimited gas tank who knows how to find his wins even in hard fights. Kevin lee consistently relies on his takedowns and positional control on the ground to win his fights in much of the same way Chiesa does. He has been known to get cocky and emotional in his fights resulting in bad circumstances he always seems to find a way out of. He is a strong wrestler with confident striking and an abnormally long reach for his height. If Lee does what he usually does and goes for takedowns as his primary method of attack, I could see this fight going to a decision win for Lee if he can keep Chiesa from escaping. But, I don’t think he can, Chiesa will most likely reverse the position on the ground and get his own takedown at some point, which will lead to his dominant position style grappling and a second-round rear-naked choke finish for Chiesa.

Johny Hendricks was an NCAA Division I All-American wrestler and has one of the hardest left-hand punches in the world. He has competed for most of his career in the welterweight division and was a title challenger at one point with wins over top 10 fighters like Carlos Condit and Robbie Lawler. He fought to a closely contested split decision loss to George St. Pierre for the title, a fight some people scored for him. After he fought the royalty of the welterweight division he began having trouble making weight and it became clear that he was catastrophically depleting his body to make the 170lb weight limit. After missing weight multiple times, he made the move up to middleweight where he would face one of the scariest men on the planet, Hector Lombard. He etched out a decision win over Lombard in a back and forth brawl to end a three-fight losing streak.

Tim Boetsch made his UFC debut in 2008 and has had a career checkered great wins and regrettable losses. He is an NCAA Division I wrestler, like Hendricks, however he wasn’t able to attain the awards that Hendricks was. He’s become known as a grinder in his MMA fights, wearing guys down until they eventually wither under his nonstop pressure. He’s not a terribly fast athlete or notably athletic in any range but he possesses good skills in all the combat styles of MMA although I doubt he will be submitting anyone from his back. His fighting philosophy seems to be primarily centered around standing and throwing bombs and working into a takedown to finish in dominant position for ground and pound TKO victories.

My prediction is a Johny Hendricks KO via huge left hand and ground pound finish. Boetsch has been the gatekeeper of the middleweight division for a long time and he is (probably) bearing the end of his career. Johny Hendricks tends to get tired in the later rounds of his fights and that could lead to this one seeing the judges’ score cards at the end of the night. I still think he’ll KO Boetsch inside of two rounds.

I am one of BJ Penn’s biggest fans and it will be hard for me to remain without bias for this one. I am personally very emotionally conflicted in this fight. A big part of me is happy and excited to BJ Penn coming back to the Octagon but another potentially larger part of me would rather see the legend stay in retirement. He is a UFC Hall of Famer. Former Lightweight Champion. Former Welterweight Champion. His first professional fight was in the UFC in 2001 at UFC 31. He fought Lyoto Machida in an open weight bout in Japan weighing in at 191 pounds while Machida weighed 225. He was one of the first real champions of MMA that would fight anyone at any weight and had elevated level skills both standing and on the ground. His boxing was daring and relentless and he never cared about dangerous situations when he was throwing his punches that worked to profound effect. His BJJ work was groundbreaking with his inhumane flexibility that allowed him to use advanced techniques previously unthought of in the world of MMA. He fought and beat the baddest men on the planet for over 2 decades. Champions like Matt Hughs, Sean Sherk, Kenny Florian, Jen Pulver, Renzo Gracie, Duane Ludwig and the list goes on and on.

Dennis Siver is another UFC veteran that has been within the top MMA organization for over 20 years. He started out at UFC 70 in 2007. His UFC career over the course of time has been a bit spotty and inconsistent but he has notable wins over Spencer Fisher, Diego Nunes, and Manvel Gamburyan. He fights out of Manheim, Germany and prefers to keep his fights standing in striking ranges. He is a kickboxer at heart but has some sufficient skills on the ground to keep him out of trouble against most guys, but BJ Penn is not most guys. Siver will be no match for BJ on the ground. Siver will unquestionably try and keep the fight standing to use his kickboxing technique to try and knockout BJ. Although BJ is coming off of 4 losses and 1 draw and seems to have been surpassed by the modern era of MMA, Siver is at least stuck in the same golden era as Penn and is coming off of two losses himself. I have BJ Penn by rear naked choke in the second round.