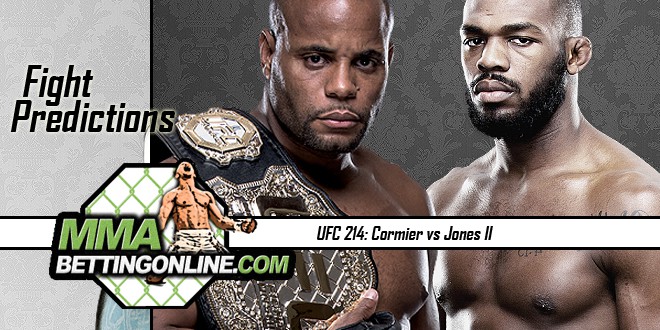 UFC 214 is likely the most anticipated fight card of 2017. The card is bursting with incredibly talented, strong and respected fighters, and takes place this weekend, July 29th at the Honda center in Anaheim, California as Jon Jones will face Daniel Cormier for the light-heavyweight championship of the world. Jones never lost the title in the fight, it was taken from him as a consequence of his legal trouble and Cormier has been holding the belt, defending it successfully ever since. Now that Jon Jones has handled his legal issues with drugs and alcohol, he’s back to claim what he never lost to begin with. This is the fight card that I have personally been the most excited for this year.

The co-main event is a welterweight title fight between explosive striker, Tyron Woodley and the marathon grinder Demian Maia. You will get to see the baddest women on the planet, Cris Cyborg as she faces off against former Invicta bantamweight champion, Tonya Evinger. Then there is the fight that I am most excited about and will probably win Fight of the Year. Robbie Lawler versus Donald Cerrone is a fight I have been waiting for since it was first scheduled at UFC 205 and then rescheduled at UFC 213. I can’t express how excited I am for this one so I’ll just get right to it.

(And for those of you who enjoy betting on MMA fights, you will find the current betting odds listed as of this writing.  It is likely the odds will shift somewhat as the event nears, so you can check the most recent fight odds in real time to get the latest opinions from the oddsmakers.)

Daniel Cormier’s only loss is to Jon Jones. The two have a vendetta against each other that is one of the most intense in the history of MMA. Even when the cameras are off, these two will likely go at it if they see each other with no one else around. Cormier has popularly talked about Jones’ drug problem and consistently remarked on how he isn’t a champion because of how he behaves outside of the octagon. Jones on the other hand has consistently retorted with the fact that he never lost his title in a fight and because of that, he feels as though Cormier is not the real champion. Jones has admitted in the media that he has problems with drugs and alcohol in the past as a result of his nerves for his fights.

He’s a young guy in the scheme of things and he has stated publicly that he used drugs and alcohol in the lead up to his fights out of nervousness. He wanted to have an excuse if he lost. In one of the more notable recent press conferences where Cormier and Jones were locked in yet another heated argument, Jones expounded “I beat you after a weekend of cocaine!” The crowd lost it and media went nuts. Jon seems to be falling into his bad guy role naturally without the need to fight it any longer. Daniel Cormier has been the reigning and defending light heavyweight champion for two years since Jon has been gone. Now, Jon Jones is back and this will be the true test for Cormier’s championship. These guys have been training for each other for a long time.

They are both high-level wrestlers, Cormier has the higher wrestling credentials despite being taken down several times by Jon Jones in their first fight. In fact, Jon Jones is responsible for the first takedown of DC’s career. Jones has the more effective striking and one of the most significant reach advantages that you will ever see in an MMA fight. He has an astounding 12 in reach advantage while standing 5 inches taller. Jon Jones has the greatest number of significant strikes landed in light heavyweight history and highest takedown defense rate in light heavyweight history as well. That’s a bad combo for Daniel Cormier. He is also the younger fighter at 30, while Cormier is getting old for MMA at 38. Mentally, there is lot to lose for DC while not as much for Jon Jones. Cormier has already lost to Jon Jones and if he loses again, he will likely not get another shot at fighting him. However, if Jon Jones losses, there will be a clamor for a third fight between them to settle the score.

Daniel Cormier will have to close the distance to negate the reach advantage of Jon Jones while Jon will likely stay as far away as possible to remain at his distance. Fighting in close is something that I’m sure he has trained for as it’s no secret that Cormier will have to close the distance if he wants to win the fight. Jon is great at distance and remains dangerous even in the clinch so Cormier isn’t safe in the shorter range either. Jon Jones is one of the most creative fighters in the UFC’s history and he shows that predominantly with his elbows. His coach has even remarked that he is finding new wasy to throw his elbows which is incredible on top of the elbows he was already throwing. The only negative thing I can find to say about Jon besides his life outside the cage is that he didn’t look like himself in his fight after a long layoff with OSP. Now he has another long layoff and I’m interested to see how all the new life circumstances will affect his fighting edge. I have to call this one for Jon Jones via decision.

Tyron Woodley is all explosion. All right hand, and pretty much all knockout power. He is a high level collegiate wrestler and he has the best right hand in the business. He has a 2-inch reach advantage over Demian Maia and the greatest takedown defense in not just the division, but in the entire UFC. He is officially a brown belt in BJJ under Ricardo Liborio and was an NCAA Division I All-American in 2003 and 2005. Demian Maia is almost the exact opposite. While he has decent stand up, Maia is a 4th degree BJJ blackbelt under Fabio Gurgel and has 12 submission victories in the Octagon. He is a decorated BJJ world champion and makes no attempt to hide it when he is fighting. He is riding a 7-fight win streak over top contenders like Jorge Masvidal and Carlos Condit and is known for grinding out victories in the later part of fights because he just doesn’t stop.

This matchup is an interesting one form a sports science perspective. Tyron Woodley is your short burst athlete. He’s dangerously explosive and violent but he requires time in between his explosions to recover for the next one. Demian Maia, on the other hand, is more of an endurance athlete, a marathon runner to Tyron’s sprinter. Maia has a low takedown percentage but he always manages to get each of his opponents down despite repeated failed attempts. This is the epitome of the grinder. If this fight goes into the championship rounds I see Demian Maia successfully getting a takedown and controlling the fight on the ground. However, Woodley has the highest takedown defense rate in the UFC and he is so fast it would be hard for Maia to really catch him early. It’s not as if he hasn’t shown an ability to outlast takedown attempts as well. When Tyron fought Jake Shields, Shields attempted to take Woodley down 18 times and failed to take Tyron Woodley down 18 times. This tells me that despite fatigue, Woodley will be able to defend takedowns. However, Jake Shields isn’t quite the backpack that Demian Maia is and Maia is willing to resort to anything to get the fight to the mat. Maia may opt for the third option and pull guard, he may even pull quarter guard to get a sweep and end up on top like he has in the past. He has been known to fake being hurt by shots to bring the fight to the ground and to get even more creative in his attempts. Despite how creative it is, if the fight goes into the championship rounds it will likely be a Maia decision win, but I’m taking Tyron Woodley on a KO win early in the fight. Especially because Maia has only had 5 weeks to train for this since his last fight.

This is the fight that I am most excited for. I’ll start this off by making an early prediction that it will be the fight of the year in 2017. Both guys are madmen. Robbie Lawler has made a career out of his incredible ability to run head first into a firefight with no fear at all. He would scare the devil himself with his grit and determination in the face of defeat. I once saw him get his legs kicked out from under him repeatedly by one of the best kickers in the history of MMA, Melvin Manhoef. Right when he was at the pinnacle of defeat, he uncorked an overhand that he pulled out from the back of the crowd and knocked out a kickboxing champion with one punch while he was hurt. He’s a maniac. He already has two Fight of the Year awards for his fight in 2014 with Johny Hendricks and his unforgettable bout in 2015 with Rory MacDonald. He was the EliteXC middleweight champion and is former welterweight world champion of the UFC. The only knock I can make on him is that in recent years his chin has become a little suspect.

Donald Cerrone lives his life from one adventure to another. He can be seen on fight week out on his boat drinking beers with a girl balancing on his shoulders while a boat pulls him on a wakeboard just like he is at any other time of the year. He became known for his availability to fight anyone at any time and the frequency with which he takes fights in the UFC. He also garnered some attention for how little he cares for the UFC championship in comparison to his desire to get the best and most exciting fights there are. Like Lawler, he is a madman that runs gleefully into the fray ready to throw down and make it a real fighter’s fight. He likes to stand and trade and he appreciates an opponent like Robbie Lawler who will do the same. He is a decorated kickboxer with an interesting and smart adaptation to MMA as his ground game, especially off of his back, is highly developed for the inevitable likelihood of his opponents attempts to take him down after feeling his striking pressure. The only knock on Cerrone is that his body has been known to be weak.

I simply can’t make a prediction on this one, but I guess I have to try. Lawler seems a bit weak in the chin while Cerrone seems a bit weak in the body. Coincidentally enough, I see the likelihood of a good body shot coming from Cerrone more than Lawler and vice versa with a wild overhand to the chin from Lawler. Despite that, there will undoubtedly be a knockout in this fight, but I don’t want to see it happen to either of these guys. They are both coming off losses, Lawler, having just lost his championship fight with Woodley and Cerrone losing to Jorge Masvidal. Lawler has the advantage in power but Cerrone has the advantage in technique and precision. I CAN’T DO IT. I DON’T KNOW HOW TO PICK. It’s a crapshoot. Lawler by KO round 3. There, I did it and I hate myself for it.