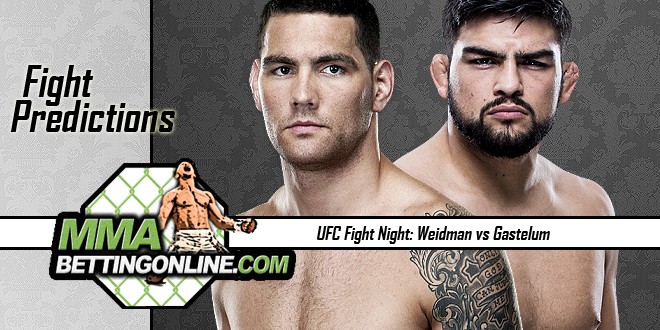 A UFC event is finally coming to Long Island for the first time this weekend and it features a hometown fighter in the main event. Chris Weidman was born and raised on Long Island and has remarked on several occasions about how excited he is to be fighting on this card. His opponent, Kelvin Gastelum is a TUF tournament winner and is technically on a three-fight winning streak despite his last fight being overturned to a no contest because he was flagged for marijuana in the post-fight drug test. Chris Weidman is currently on a three-fight losing streak after suffering the first loss of his career to Luke Rockhold at UFC 194. This will be a fight between a young up and comer looking to keep his momentum and a veteran former champion trying to stay relevant. Fans are excited, and the oddsmakers are too as they prepare betting odds that cover the UFC on Fox event.

I’ll start with the facts first. Chris Weidman is an NCAA division I All-American wrestler with a blackbelt in Brazilian Jiu Jitsu under Matt Serra and Renzo Gracie. He fights out of the Serra-Longo Fight Team in Baldwin, New York under Matt Serra, Ray Longo, and Mark Henry. He’s 13-3 with his last three fights making up all of his career losses. All of those losses came by way of TKO or KO despite various controversial circumstances.

Weidman has lost a serious amount of momentum in his last three fights and I believe he just hasn’t been the same since he lost his belt to Luke Rockhold at UFC 194. With that said, he has one of the best striking coaches in the world in Mark Henry and he knocked out arguably the greatest fighter (and MMA striker) of all time in Anderson Silva when he won the middleweight championship. He has a style where he likes to mix up his striking and his takedowns to keep his opponents guessing. When he is up on his feet he tends to favor his heavy punches over his kicks despite showing improved kicking ability in his fight with Yoel Romero. What he also showed in his loss to Yoel was his wrestling ability. Although he wasn’t able to keep Yoel down, he was able to grab a single leg and take Yoel down on multiple occasions which is a feat all in it’s own against a world class Olympic wrestler. If he can take Yoel Romero down, I have a hard time believing Kelvin Gastelum can stop a Weidman takedown.

Kelvin Gastelum fights out of Kings MMA under Rafael Cordeiro and is officially a purple belt under Eddie Brazo in his 10th Planet Jiu Jitsu system. Kelvin was picked last on team Sonnen in the 17th season of the Ultimate Fighter and later went on to win the whole tournament finishing all three of his opponents before meeting Urijah Hall in the final. He is 13-2 with 1 no contest. The one no contest was, in reality, a knockout over one of the most experienced and dangerous guys in the world, Vitor Belfort. It was later deemed a no contest after Gastelum failed a post-fight drug test for marijuana.

He’s coming off three dominant performances in the octagon and his only two losses are via split decision, one of which is from current welterweight champion, Tyron Woodley. Kelvin is coming into this fight with Weidman after knocking out Vitor Belfort in dominant fashion. He’s the younger fighter and he is coming in with more perceived momentum. After missing weight on multiple occasions at welterweight he has moved back up to compete at middleweight and has looked great in doing so. He is no longer depleting his body and looks fast at middleweight. However, it is commonly known that Chris Weidman is big for the 185-pound class and will have a significant size advantage on Gastelum as they enter the cage. Despite the size advantage, my prediction comes down to Gastelum being the younger and more motivated fighter. I think the main factor in this one will be mentality. We know Kelvin still has more to show us in the octagon but there are questions surrounding whether or not Chris Weidman is still totally devoted to his career as a mixed martial artist since he lost his belt. I have no doubts that he will be able to take Gastelum down, but I believe Kelvin will get up and ultimately land a big shot and finish the fight by TKO in the second half of the fight. There you have it, Kelvin by TKO in the second half of the fight.

The oddsmakers seem to agree with me as most MMA betting sites are listing Gastelum as the favorite for the win. My prediction goes a little bit deeper than the odds though.  Do you agree or disagree with me?  Let me know how you see it.