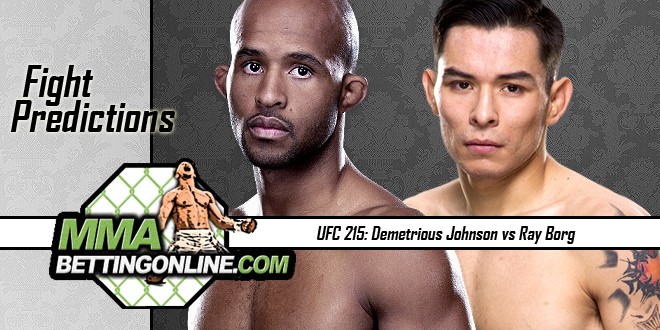 When we think of the best MMA fighters alive we start to think about the records that they hold and the accomplishments that they have achieved in order to define their success. No one was ever more successful in MMA than Anderson Silva in his prime. He defeated all of the best fighters in the middleweight division and held one of the longest reigns as champion in UFC history. Length of championship reign, however, isn’t the best indicator in determining the most successful champion in history. If we are asking ourselves who the best champion ever was, we would have to define that by the total amount of title defenses. Who defended the belt the most seems like the most apt description of the best champion in the UFC. Anderson Silva currently shares that title with Demetrious Johnson at an even 10 successful defenses. This weekend, however, Demetrious Johnson is poised for his 11th.

UFC 215: Johnson vs Borg is going down in the Rogers Place indoor arena on September 9th in Edmonton, Alberta, Canada. This will be the first UFC event ever held in Edmonton. Demetrious Johnson is arguably the best pound for pound MMA fighter alive and will face the number 3 ranked Ray Borg in his 11th title defense in his reign over the Flyweight Division. Johnson has been very vocal about his desire to break Anderson Silva’s record and will undoubtedly look the best he has ever looked in his 11th title defense this weekend in Edmonton.

Demetrious Johnson is probably the most well-rounded fighter in the UFC and is consistently praised for his octagon IQ and adaptability. Two of the best compliments you can pay to a fighter. He fights out of AMC Pankration in Parkland, Washington and has one of the top coaches in MMA in his corner, Matt Hume. His record is 26-2-1 with 5 wins by KO, 10 wins by submission, and 11 wins by decision. He was the first Flyweight champion of the UFC and has been the only champion in the division since its creation. Johnson has never lost a fight at flyweight and has become known for his ability to counterstrike from within the pocket and move before his opponents have a chance to return fire.

The term “well-rounded” gets thrown around a lot in MMA. While all the fighters that compete in the UFC have been forced to have a high level of competence in all the different aspects of MMA, most fighters are specialists of one particular martial art in MMA and merely design the rest of their styles around promoting that specialty. Conor McGregor, for instance, has shown that he has high level skills on the ground in his fights with Chad Mendes and Max Holloway, but it’s pretty well known that he’s not in the cage looking for submissions. He prefers to box, he grapples to get back to his feet and box, not to dominate with his grappling.

Demetrious Johnson is truly well-rounded. Against a world class Brazilian Jiu Jitsu blackbelt, Wilson Reis, he repeatedly defended takedowns while avoiding big shots and dealing damage on the feet. He wasn’t afraid to grapple and consistently won in the clinch exchanges without just exclusively trying to escape them. In the third round of their fight he took the world class grappler down and chose to grapple with him. He beat the grappler down on the ground and ended the fight with a submission after some ground and pound. He has become known for beating guys with their own specialties. I can’t think of anything more impressive than that.

His opponent, Ray Borg is very explosive and has great technical ability in any position that Mighty Mouse will be able to put him in. Admittedly, I know very little of Ray Borg before coming into this fight because of the lack of marketing that the flyweight division suffers from. That, coupled with the fact that I am a huge fan of his opponent, Demetrious Johnson, is sure to make for a very biased prediction here. Nevertheless, Ray Borg comes into this title fight with 12 wins and 2 losses. Of those wins, 6 have come by way of submission, 2 by knockout, and 4 by decision. He fights out of Albuquerque, New Mexico and trains at Jackson Wink MMA Academy alongside the best fighters in the world. Most of Borg’s submissions came by rear naked choke. That tells me that his grappling game is tailored around dominating good position and staying consistently heavy on his opponents.

In watching his fights, I immediately notice his speed and striking fluency. He is crafty on his feet and moves extremely well. He likes to throw a fast uppercut after setting it up with a jab and he lands it frequently and with frightening speed. He mixes it up with takedowns but it seems like it doesn’t do that quite enough. Despite seeming to have a more advanced skillset on the ground, he tends to try and keep fights standing to land his quick blows. Ultimately, I believe, this is the reason he has so many decision wins and also the reason why both of his losses are also decisions. I think he flounders in striking against some opponents with striking backgrounds while being adept enough to counter and defend and keep the fight moving, his offensive striking skills seem to be limited in their variances. While his striking is good and even enough to win him some fights, I think it’s still hard for him to create significant amounts of damage with it on a consistent basis which might lead to stalemates and close fights.

I don’t think he will be able to strike effectively against DJ, not be able to hold him down if he can even complete a takedown on the champion. I think DJ will find his weakness early on and although my brain tells me to predict a decision win because of the propensity for decisions from both of these fighters, I think DJ will beat him down and then submit him in the second half of the fight. There it is, Demetrious Johnson by submission after the halfway point of round 3.  Following are the current MMA betting odds for this fight.