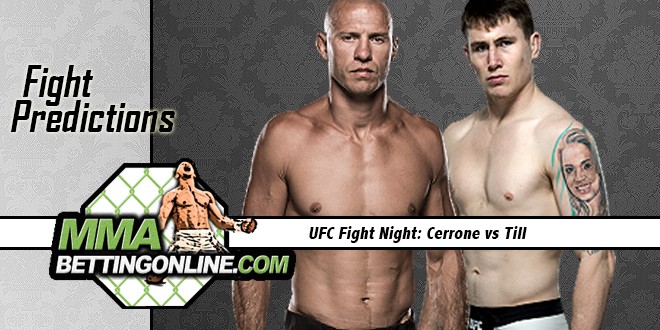 In the history of the UFC we have seen similar match ups like Donald Cerrone vs Darren Till, a young and promising up and comer versus a proven exciting veteran. It’s a good fight to make if you’re the UFC. It’s a win-win. Cerrone is coming off of a loss; a win over Darren Till reestablishes him as one of the top fighters in the welterweight division. If Darren till manages to get the biggest win of his career over Donald, the UFC has a new star to make. UFC Fight Night: Cerrone vs Till comes at you, this weekend on October 21st, 2017 from Gdansk, Poland. UFC betting odds are live as MMA fans around the world gear up for an interesting fight night.

Donald Cerrone vs Darren Till

Donald Cerrone is one of the baddest men on the planet and has held that title for a very long time. He has become known for his wild lifestyle and true willingness to fight anyone, anywhere, and at any time. His fighting style is one that communicates his unique philosophy on the techniques employed within mixed martial arts. Typically, when a striker comes into the UFC they will attempt to never fight on the ground, like Joanna Jedrzejczyk for instance. Donald, on the other hand, quickly accepted his fate as a striker in MMA and decided instead of constantly defending takedowns like all the other strikers, he would develop his grappling to such a high level that people would begin to think twice about taking him down. Today, he still uses his striking as his main method of dealing damage but has 16 submission wins in his career, an impressive statistic for a former professional Muay Thai fighter.

His opponent, Darren Till, clearly believes that he is the best fighter on the planet. He went fishing for Santiago Ponzinibbio in his last post fight interview but ended up with a much bigger fish in Donald Cerrone, and he may not be able to reel this one in.

Till has a unique story of his own. He started his life in combat sports at age 12 and turned pro only 3 years and 3 amateur fights later. In his UK home in 2012, he got into a brawl at a party and got stabbed within an inch of his life, literally. The knife came within an inch of a main artery. After that, his coach convinced him to move to Brazil to continue training with fewer distractions. His plan was to live there for 6 months. He ended up staying for over 3 and half years having his first 12 fights in South America, 11 of which were in Brazil. He has an undefeated record with 1 draw in a fight that earned him fight of the night honors in just his second UFC bout. He believes himself to be the best striker in the welterweight division which makes it a fun match up with Donald Cerrone because there will likely be very little stalling or grappling.

While both of these fighters are more dominantly strikers than they are anything else, they are very different strikers. Darren Till is a southpaw that likes to rely on distance and range, which he manipulates very well. He will act primarily as a counter striker with a slow pace and a fast reaction. He closes the distance bluntly but subtly and frequently catches his opponents confused with big left hands from space and nice elbows when he is close. Donald Cerrone is an all out wild man and likes to get in the heat of the battle and ride the chaos for as long as he can. He has incredibly technical combinations and knocks people out with well-placed shots landing in sequence rather than 1 big blow (unless it’s a head kick, he’ll knock you straight dead with a head kick). Most of his submissions came first by him rocking his opponents with something on the feet and following up with dominant grappling position, striking, and eventually the submission. My prediction for this fight is just that. Early in round 2, he’ll rock Darren Till, drop him, and submit him.  Below you will find the odds as of this writing, but you can find current odds listed in real time at any of our recommend online sportsbooks offering UFC fight night betting lines.