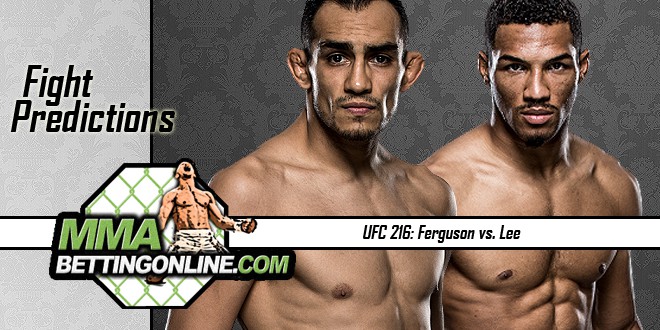 The lightweight division is in a weird situation right now. Conor McGregor’s next fight is unknown and most learned opinions in the industry have circulated the idea that he may never come back to the UFC at all. Why would he? After being paid over 100 millions dollars in boxing it would be hard to convince anyone to return to less than 10 million a fight in MMA. If he doesn’t return, that makes this weekend’s interim lightweight title fight between Tony Ferguson and Kevin Lee the premier lightweight fight in the world. One of those men will come out as the best lightweight on the planet (that can make weight and who isn’t Conor).

Demetrious Johnson vs. Ray Borg for the flyweight world title is another interesting fight on this card. It was supposed to have happened at UFC 215 in early September but Ray Borg fell ill and had to drop out of the fight. The situation that has been surrounding this fight since before UFC 215 is what makes it so unique. If Conor McGregor doesn’t care at all about returning to the lightweight division to defend his crown and instead only wants the fights that will sell the most pay per views, Demetrious Johnson seems to have the exact opposite approach. He was offered a fight with TJ Dillashaw in August as his next title defense, which would have been a popular fight for the flyweight division. He promptly refused the fight for various reasons, the most notable of which was that his next fight would be his chance to break Anderson Silva’s title defense record and if TJ Dillashaw didn’t make weight that would ruin his chance for breaking that record. TJ Dillashaw is the former Bantamweight champion of the world and commands a strong fan base, unlike any other challengers in the fledgling flyweight division including Ray Borg.

Tony Ferguson seems to have an endless gas tank. His cardio is ridiculous. He was a two-time all-American at grand valley state university in wrestling and has a wicked submission background training with Eddie Bravo at 10th Planet Jiu Jitsu where he holds a brown belt. He’s 22-3 with 9 wins by KO and 8 wins by sub. Ferguson has shown in his bouts with Josh Thompson and former champion Rafael Dos Anjos that he can fight anywhere the fights takes him. He has long limbs and crisp striking that compliments the rest of his game nicely. He has tough takedown defense although he has been taken down in the past, unorthodox and high level submissions from his back, and like I mentioned before, an incredible gas tank. I give Tony the edge in cardio, striking and submissions.

Kevin Lee is coming off of three consecutive rear naked choke finishes and has shown to have a strong wrestling skillset in the octagon. Lee wrestled for the same school that Ferguson wrestled for only he didn’t take his competition quite as far. Despite the fact that he wasn’t as accomplished in college, he has used his wrestling to a much higher success rate in the octagon than Ferguson has. This could be because of the overwhelming amount of weapons that Tony has elsewhere, or that he just doesn’t favor wrestling like Kevin Lee. I’ve given the wrestling advantage here to Kevin Lee but only because I think he is more likely to lean on it. Lee is 16-2 has 1 KO and 8 subs. Of his 8 submission wins, 5 of them have come by way of rear naked choke.

Kevin Lee likes to come out and strike a little bit and then eventually he always shoots for a takedown. He’s a good wrestler so he tends to get the takedown and immediately start working to take the back. It’s a high likelihood game plan and that makes him a smart fighter, but its predictable. Tony Ferguson is also a smart fighter but he has had the experience of facing former champions and has developed his skill sets outside of one basic game plan.

These are both guys with exceptionally long reaches for fighters in the Lightweight division so I expect they will strike for a little until Tony catches Kevin with something unorthodox. If I’m right, Kevin will shoot for a takedown that will either be defended or used as opportunity to get a submission by Tony. I expect a ground battle will ensue. Tony will get back up and continue to control Kevin Lee on the feet. Bottom line: Tony has the striking and grappling advantage and wont be easy to take down either. He has the cardio advantage so if he doesn’t catch Lee with something early he’ll drag the fight on until Lee starts drowning. I predict a finish in the second half of the fight (unless Lee gets caught early). Tony Ferguson by Sub opened up by strikes in the second half of the fight.  Below are odds at the time of writing, but check out the current MMA betting odds for real time updates.

Ill be honest, I’ve lost some respect for Demetrious Johnson lately based on his decision to fight Ray Borg over TJ Dillashaw. Sure, Ray Borg was rightfully next in line, TJ Dillashaw has never made 125, and he’s got to get his records to cement his legacy, whatever, whatever.

He took the easiest fight because he wants to win and that’s not what a champion does (in my own opinion). I hate to keep mentioning Conor McGregor, but Conor is the example I am looking for here. He takes the craziest fights no matter what his chances of winning are because he knows that’s how you cement your legacy and that’s what champions do. They stand up to the overwhelming odds confidently and take those challenges head on. Demetrious Johnson, on the other hand, was given a fight that would not only bolster the flyweight division, which it is in desperate need of, but also bring in the pay per view points and put him in a better position to command more money per fight, which has also been a frequent complaint of his. His most viable reason for declining the Dillashaw fight and taking the Ray Borg fight is because he thought Dillashaw might not make 125 having never been that low in his career. If TJ didn’t make weight than DJ wouldn’t able to break the title defense record set by Anderson Silva that has apparently been so important to him.

Well, it doesn’t make a whole lot of sense when you consider the fact that despite never being down to 125, TJ has never missed weight. Ray Borg, on the other hand, has missed weight several times at 125 and has already had to pull out of this fight once. When you look at the pound for pound rankings, I want you to consider whom the fighters had to beat to get on that list. Despite the fact that Demetrious Johnson is at the top, his competition has not been anywhere near the level of the other champion’s. With all this in mind, of course I think Demetrious Johnson will win his fight with Ray Borg. They are both world-class fighters but Demetrious is a special fighter and he wants to make sure he can take Anderson Silva’s record home. But let me ask you, what does holding that record mean if the competition wasn’t on the same level as Anderson’s?