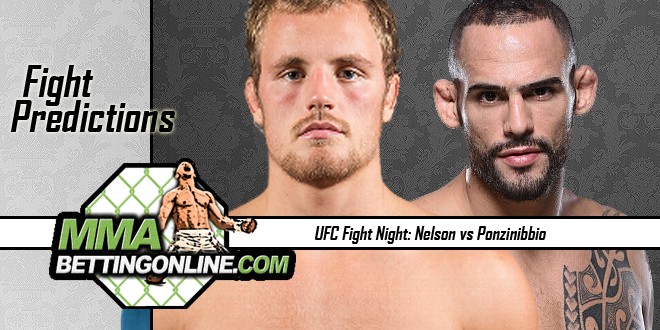 UFC Fight Night 113 takes place July 16th in Glasgow, Scotland where Gunnar Nelson will most likely try and submit Santiago Ponzinibbio in the main event. This fight night seems to be about building up new blood for the next generation of champions in MMA. None of the fighters on the card are ranked except for those in the main and co-main event but there are some names that you have undoubtedly seen before. Stevie Ray is coming off of a win over UFC veteran Joe Lauzon and his opponent, Paul Felder, has been in there with the likes of Edson Barboza and Josh Burkman. Ultimate Fighter alumni, Khalil Rountree will also be featured on the card against Paul Craig who will be seeing his third trip to the Octagon. Below I’ll be diving into the main event fight between Gunnar Nelson and Santiago Ponzinibbio in detail. As always, there will be a healthy dose of speculation and fan bias that I just can’t escape. Enjoy.

For those of you interested in placing bets on any of these fights, you can review the current betting odds for Fight Night 113 to monitor any shifts in the lines leading up to the event. Leading online sports betting sites that offer lines on MMA fights may the odds as the fight nears.

Gunnar Nelson is a teammate of Conor McGregor’s at Straight Blast Gym in Ireland and that becomes obvious about 2 seconds after he starts fighting. His fighting stance is almost identical to that of Conor’s and he uses it in the same way. He’s very light on his feet and keeps an extremely wide base. He judges distances very well and he likes to keep the center of the octagon with forward pressure to keep his opponents on their rear leg. He’s not afraid to leap in with a combo because his balance is excellent and he keeps his lead leg in front of him so he can escape at any moment with leap right back out of danger. He may leap in for a combo, or a takedown and beside being an orthodox fighter, this is where his main difference with Conor lies.

Gunnar Nelson is a world class Brazilian Jiu Jitsu fighter and has competed at the highest level of international BJJ competition. He won gold at the Pan American Championships, and silver at the Mundials. Of his 16 professional MMA wins, 12 of them have come by submission. In his latest fight with Alan Jouban he was clearly winning the fight on the feet when he closed the show by landing a perfectly placed right straight punch that wobbled Jouban. Nelson’s instant reaction in the finishing moment of the fight was to snatch his opponents head and drop for a guillotine choke which ended the fight. As you can imagine, most fighters would have let their hands go, but not Gunnar. That should provide some insight regarding his philosophy of fighting. Most successful MMA fighters embrace a specific philosophy relevant to their fight style.

His opponent, Santiago Ponzinibbio, is Brazilian Jiu Jitsu Blackbelt despite the fact that he almost never grapples in his fights. He’s from Rio De Janeiro, Brazil but currently resides in Coconut Creek, Florida where he trains at the American Top Team headquarters. He was on the Ultimate Fighter: Brazil and won every fight he had on the show before sustaining an injury that forced him to pull out of the finale. He has 24 wins with 3 losses and has never been submitted. He’s knocked out 13 guys in comparison to his 6 submissions and based on those stats alone, I wouldn’t have to watch his fights to get an idea of how he likes to compete.

But I did, and I wasn’t surprised. Santiago Ponzinibbio just wants to bang, bro. He has great technical striking and he uses a heavy forward pressure to keep his opponents pinned to the cage as they try and move laterally to escape his pressure. He relies almost entirely on his punches but when he throws a kick, he means it. He throws straight punches well but he shows more of a propensity to swing dangerous hooks in a semi-wild fashion. He has violent and wild intent on those arching hooks but he doesn’t throw caution completely to the wind like Wanderlei Silva might. He stays a little more balanced and ready for a clinch or to defend a takedown. Santiago’s anti-grappling technique is also very high level. He is very adept at defending takedowns even when they are timed extremely well. In the event that he is taken off his balance, he’s good at scrambling immediately back to his feet. By the way he fights, he clearly would rather kickbox than grapple.

The first questions I have for this fight deal with how the takedowns will go. Will Gunnar Nelson be able to secure the takedown and keep Ponzinibbio from scrambling back to his feet? We haven’t seen much of Santiago’s round game in his fights but he does have a blackbelt, how good is he on the ground? Will he be able to stop Gunnar’s submission attempts? Then I might wonder, does Gunnar even need to take this fight to the ground? His striking style is one that may frustrate and confuse Ponzinibbio. Both of these fighters like to push forward and keep their opponents on their heels. Which one will be able to accomplish that? I think Gunnar will have a hard time getting Santiago down until he uses his strikes to really set the tone of the fight. I think he will get a hard-fought takedown after landing some clean strikes and dominate Santiago on the ground until he gets a TKO or submission victory. I wouldn’t be surprised to see some tricky BJJ from Ponzinibbio which results in enough to simply not get submitted by Gunnar. In that case, I think we would see a decision win for Nelson. I also wouldn’t be surprised if we saw a clean knockout by Gunnar on the feet. Any way you look at it, I have Gunnar Nelson winning this one. My official prediction is submission, third round.