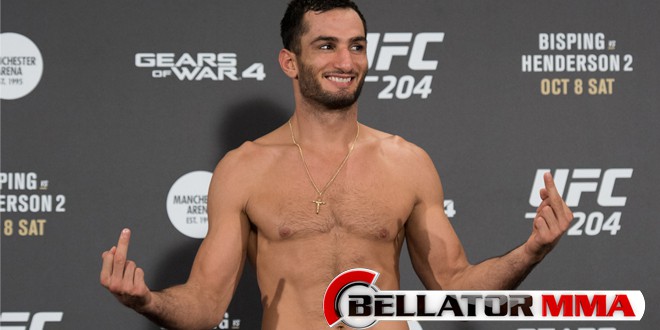 Another top contender on a winning streak has vacated the premier organization in Mixed Martial Arts for greener pastures in Bellator. Gegard Mousasi is fresh off a TKO win over former middleweight champion and the man responsible for proving Anderson Silva is human, Chris Weidman. Before that, Mousasi had 5 consecutive wins, KOing guys like Vitor Belfort, Thiago Santos, and Uriah Hall. Needless to say, Mousasi has been favored in the MMA betting lines covering his fights time and again.

Mousasi’s contract expired after his fight with Chris Weidman at UFC 210. The number 4 ranked middleweight contender promptly entered renegotiations with the UFC where the organization gave him a disappointing offer. As the UFC didn’t see the value in the long time MMA champion from past promotions, Bellator picked up where they left off and was able to come to an agreement that was satisfactory to both parties. Gegard has past experience with the president of Bellator, Scott Coker. Coker was the founder of Strikeforce, where Gegard Mousasi won the light heavyweight championship.

Gegard is only the latest in a long line of top talent from the UFC to make the switch since the Reebok deal went into effect. High-profile fighters like Brendan Shaub and Matt Mitrione have publicly denounced the pay structure in the UFC in sponsorships as a result of the Reebok deal, stating that where they made 6 figure amounts before, they would now only be making nearly 10k. Bellator offers more options for sponsorship pay which directly translates to more opportunities for fighters to make more money than in the UFC.

Aside from the money, which is an obvious determining factor for everyone, many fighters also stated in interviews that it was a noted lack of respect from the UFC that ultimately led them to make the switch to Bellator. Former UFC blockbusters like Wanderlei Silva, Benson Henderson, Lorenz Larkin, and Phil Davis have come out and talked about how the UFC handled their individual cases without respect for the time that these guys had put in for the company. Even current UFC flyweight champion, Demetrious Johnson, has had similar qualms with the organization about how they treat the fighters on a regular basis and has recently addressed this on social media.

While most people tend to think that fighters are migrating to Bellator because they can’t compete at the level of the UFC, I would remind you that most of the fighters that made the switch to Bellator where on winning streaks when they did. Ryan Bader was a 2-fight winning streak, Lorenz Larkin was also on a 2-fight streak and Wanderlei Silva had just knocked out Brain Stann.

Gegard Mousasi is one of the most experienced athletes currently competing in MMA with just under 50 professional fights over the course of a 14-year professional career. He won the cage warriors middleweight championship, the DREAM middleweight and light heavyweight titles, and was the Strikeforce Light Heavyweight Champion before making his jump into the UFC. There is currently no mention of who he will be facing in his Bellator debut.

Who do you think he will face?